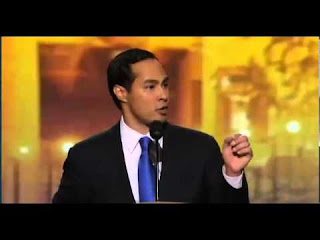 We Texas Democrats have a long tradition of trailblazing personalities and politicians in our party giving keynote addresses at DNC conventions that launch them into the national consciousness and leadership spotlight .

It happened twice for Barbara Jordan in 1976 and 1992.   After her 1976 speech she was seriously considered by Jimmy Carter to be his vice president in the wake of her DNC speech.   Bill Clinton considered her for a Supreme Court nomination when he got an opportunity to nominate a justice.

Ann Richards after her 1988 keynote speech went from being our state treasurer to our next governor two years later.  Now we have San Antonio mayor Julian Castro's historic turn as a DNC keynote speaker.

Here's hoping I just got a glimpse along with a national audience of our next governor, US senator or potential presidential nominee.