Yo Hallmark Channel, Next Year Can We Get More Diversity In Your Christmas Movies?

Yes, Black people fall in love, get married, buy  romance novels, and like watching romance movies, too.   It would be nice to see ourselves occasionally represented in your made for TV romances especially since we persons of colors are part of the 87 million homes that have Hallmark Channel as part of their cable package.
--TransGriot, October 15, 2012, "Yo Hallmark Channel, Black People Fall In Love, Too"

As an incurable romantic, I do like reading romance novels and love a good romantic movie from time to time as an escape because the topic I write about are serious in terms of human rights issues.

Hallmark Channel bills itself as 'The Heart of TV'  and built its cable brand on broadcasting made for TV romance movies it produces along with broadcasting classic TV shows like Frasier and The Golden Girls.  It is part of many cable TV packages and has 86 million viewers.

It also likes to do holiday themed programming.  Its popular and highly rated 'Countdown To Christmas' lasts from the first weekend in November to Christmas Day as the network broadcasts 24 hours of Christmas themed movies.

From December 26 to January that shifts to the 'Countdown to New Year's Day' which ends with the broadcast of the Tournament of Roses Parade in Pasadena, CA.  In February it's all romance all the time leading up to Valentine's Day.

But no matter what the theme, there is one consistent, nagging issue about that themed programming that becomes glaringly obvious in 24 hour rotation.

The overwhelming whiteness of it.

I noted that in my post last year about it, and I see that nothing's been done to correct the problem I noticed last year.   This year's 'Countdown to Christmas' themed movies probably made Fox Noise and Megyn Kelly smile because they had the diversity of a Republican Party convention.

Black folks meet, fall in love with each other and get married during the holidays, too. As a matter of fact that simple point is what keeps royalty checks consistently flowing into Kayla Perrin's and other Black romance writers bank accounts.

As The Best Man Holiday and its $69.8 million box office emphatically continues to prove, we African-Americans do have universal stories that will appeal to a wider audience and want to see ourselves represented on the small and silver screens..

The same is true of the Latino and Asian community and movies that are performed by an all-Latino or all- Asian cast.   They would like to see themselves represented in the media they watch, too

In fact when I do discover movies such as Nothing Like The Holidays, which was a Christmas movie released in 2008 with a predominately Latino cast, I see them as a refreshing change, because romantic movies with all white casts are so been there, bored with that.

So next year Hallmark and into the foreseeable future, what I and many non-white viewers of your channel want is so deceptively simple when 'Countdown to Christmas' 2014 rolls around.

Can we get some holiday movies made by you that reflect the diversity of this country?

And when I say diversity of this country, I don't mean an all or predominately white cast with a token Black, Latino or Asian actor in the background for half a second as the white leads are making goo-goo eyes at each other. 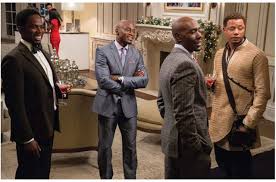 If you don't have the writers on hand to produce those scripts with the (and this is vitally important) cultural nuances of my people, then get writers to produce those Christmas romance scripts who are culturally competent to make it happen and hire directors well versed in those non-white cultures to make them.

So Hallmark, can you do that for your non-white viewers, who are part of the 86 million people who watch your channel?
Posted by Monica Roberts at 12:30 AM