What The Hell You Mean Trans Women Are 'Less Valuable'?

When I heard about New York attorney John Scarpa actually parting his lips to say that harsh sentences for killing transwomen should be reserved for certain classes of individuals, it pissed me off.

It pissed me off not because Scarpa had the cojones to say it in a last ditch attempt to deploy a variation of the trans panic defense  (which was fracked up, too) to reduce his client' sentence, but because he was trying to touch upon a sentiment that I believe far too many cis people have when it concerns transpeople.

It is one that is subliminally expressed far too often when it comes to transwomen of color.  'Less Valuable'

Less valuable because we have no rights that he as a white male, and by extension others in cisgender society are bound to respect.

Attitudes like Scarpa's are probably the root cause of why GENDA hasn't passed the GOP controlled New York Senate despite passing the New York state assembly six straight times.

All trans lives are valuable.   We have people and families who love us.  We have hopes and dreams we want to fulfill.  We want to find the person we are destined to spend the rest of our lives with. 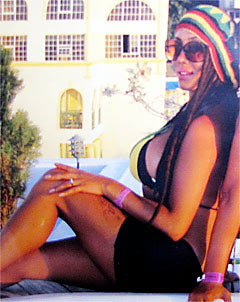 We want to simply live our lives to the best of our ability without some transphobic jerk who has a problem with us having the misguided opinion that he has the right to take it and thinking he'll get a legal slap on the wrist for it.

All human lives are valuable, including the lives of trans people. I thank God along with the New York trans community that we had a judge like Supreme Court Justice Richard Buchter on the bench who recognized that salient point and sentenced Rasheen Everett to 29 years to life for killing Amanda Gonzalez-Andujar.