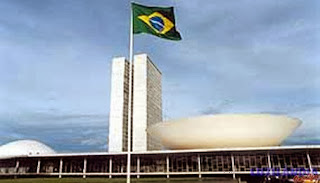 As anyone who has attended TDOR's or been paying attention over the last few years can tell you, violence against transwomen in Brazil has alarmingly spiked in the last few years.   In just this year alone there were 292 Brazilians lost to anti-TBLG violence with the vast majority of them being trans women.

A bill has been proposed in Brazil, PLC 122 to ban discrimination based on gender identity and sexual orientation.  It would also criminalize incitement of violence against TBLG Brazilians and punish violations of those offenses with up to three years in prison.

However, the evangelical lobby in the country is throwing a nasty cup in the legislative Kool-Aid.   As they do everywhere else around the world when they don't get their way, they are having a hissy fit.   They are threatening to punish legislators who vote YES for passage of PLC 122 and President Dilma Rousseff who is up for re-election for a second term in the Brazilian national elections slated to happen on October 5, 2014.

According to reports published in LGBTQ Nation, nervous legislators were preparing to cave to the evangelical phobes and shelve the bill until after those elections to appease them.

Never mind the fact that according to Grupo Gay de Bahia, 44% of the worlds' LGBT murders occur in Brazil, and one is committed against a Brazilian BTLG person every 21 hours.   The 292 murders this year were an unacceptable increase over the number committed in 2012, and the 2012 BTLG murder numbers were a 21% increase over the number of anti-TBLG murders that occurred in 2011.

Senator Ana Rita of the ruling Labor Party plans to defy the government and call the vote for Wednesday despite instructions from President Rousseff and Brazilian Minister of Institutional Relations Ideli Salvatti to delay the vote on the sorely needed anti-TBLG discrimination measure until after the October elections.

Brazilian TBLG people are pushing back against the evangelical wing pressure by organizing a protest in Sao Paulo later today and planning to be in Brasilia for the PLC 122 vote on Wednesday.

Human rights organizations are also making their voices heard and calling for it to happen, stating that the Brazilian TBLG community has waited a dozen years for their government to be drum majors for justice.

They also pointed out Brazil will be hosting the World Cup this summer and the Summer Olympics in Rio in 2016, and need to do so not only for its LGBT citizens, but visitors coming here to attend those two major international sporting events.

“The anti-discrimination law will send a powerful message that gays, lesbians, bisexual and trans people in Brazil are fully protected by Brazilian law,” said Andre Banks, Executive Director of All Out to LGBTQ Nation.

It'll not only send that message should PLC 122 pass to TBLG people inside the fifth largest nation on the planet, but around the world as well.

And that law needs to happen.