Since the 1960 Rome Olympics, with the exception of the period from 1976-1984 when the steroid fed East German women were tearing up the tracks, the USA women have had a multiple medal sprinting star in athletics.

It was Wilma Rudolph in Rome.  Wyomia Tyus did so during two Olympiads at Tokyo in 1964 and the 1968 Mexico City Games.  In Los Angeles in 1984 it was two American women who shared that golden Olympic spotlight in Valerie Brisco-Hooks and Evelyn Ashford.

In the 1988 Seoul Games, no star shone brighter or with more style than Florence Griffith-Joyner's.

FloJo's story was beginning to be told as the hometown girl competing in the 1984 Los Angeles Olympics with the glamorous looks, long nails with speed to burn.  She took home a silver medal in the 200m in 22.02 behind Valerie Brisco-Hooks gold medal winning Olympic record time of 21.81 seconds.

Now it was four years later and Griffith-Joyner after a trying post LA Games period served notice at the US Olympic Trials in Indianapolis in July 1988 the Seoul Olympics was going to be her party.

In her 100m opening heat in the 1988 Olympic trials she ran a wind aided 10.60, which was below Evelyn Ashford's then four year old world record of 10.76 seconds.  Undaunted, Griffith-Joyner obliterated the world record in her quarterfinal heat by clocking an astounding 10.49 time that STILL hasn't been matched.  The wind gauge was showing 0.0 meters per second (no wind) so it stood.

If anyone had doubts that those Flo-Jo times were flukes, in her specialty, the 200m, she just missed by .06 of a second matching East German Marita Koch's world record with a 21.77 quarterfinal time and clocked a 21.85 in the final.

After running the four fastest 100m times for any woman in history in Indy, setting a world record in the 100m, barely missing the 200m world record and setting an American record in the 200m Trials quarterfinal, Flo-Jo was a heavy pre-Olympics favorite to dominate the track in Seoul 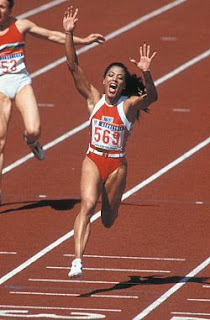 She didn't disappoint. On her way to the 100m gold medal she broke the Olympic record three times with 10.88, 10.62 and 10.54 times.  Her 10.54 time to capture the gold over defending 1984 Olympic champion Evelyn Ashford was unfortunately wind aided, so 10.62 is the current Olympic record.

It also gave Griffith-Joyner at the time the seven fastest 100m times in history.

She added another gold in the 4x100m relay  but her attempt to become the first woman ever to win four gold medals in a single Olympic track meet was dashed when she couldn't catch Olga Bryzgina of the Soviet Union down the stretch.

The Soviet 4x400m relay quartet ran a world record setting time of 3:15.17 just to get the gold with Griffith-Joyner and her American teammates having to settle for silver.   That 4x400m relay was not only the first time Flo-Jo had run an internationally rated 400 meter relay, the 3:15.51 time they ran is still the second fastest ever run.

But because Ben Johnson failed a post race drug test and had to give up his 100m gold medal and the 9.79 world record he ran to beat Carl Lewis to get it, it cast a pall over the Games and the times of Flo-Jo came under suspicion.

1984 LA Games 800m gold medalist Joaquim Cruz of Brazil started throwing shade at Flo-Jo by claiming she was on steroids or other performance enhancing drugs and there was no way she could have run those times.

She denied it, the tests came up clean, and Griffith-Joyner later won that year's Sullivan Award as the top amateur athlete male or female in the US.  She moved on after the 1988 Games to retirement, have her daughter Mary Ruth Joyner in 1990 and her post Olympic life.

But those questions about alleged drug use kept coming up, and dogged her to her untimely death at age 38. While sleeping in her Mission Viejo, CA home she died of suffocation during a severe epileptic seizure on September 21, 1998.  An autopsy conducted by the Orange County Coroner's office noted she had not died from drugs or banned substances. 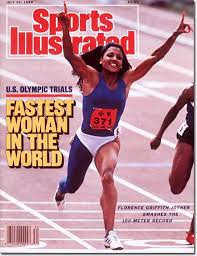 After Griffith-Joyner's death in 1998, Prince Alexandre de Merode, the Chairman of the International Olympic Committee's medical commission, stated that Joyner was singled out for extra, rigorous drug testing during the 1988 Olympic Games because of rumors of steroid use.  She was rigorously tested according to him by Manfred Donike, the foremost expert at the time during the 1988 Games, who failed to find anything

"We performed all possible and imaginable analyses on her...We never found anything. There should not be the slightest suspicion [on Florence Griffith Joyner]

So stop hating, and give Flo-Jo her due as the fastest woman ever.