So I hope UH got the sloppy play out of their system because they better be ready to play against the Knights. This upcoming game and the one next week at Louisville will probably determine whether the Cougars stay on track for that BCS bowl berth and the inaugural AAC title.
--TransGriot November 1, 2013

Damn, did I call it or not UH Cougar fans?

My fave college football team was riding high at one point of this 2013 NCAA college football season   The freshman and sophomore dominated Cougar squad was 7-1, unbeaten in AAC conference play at 4-0 and hitting the most critical two weeks of their season with road games against UCF and Louisville. 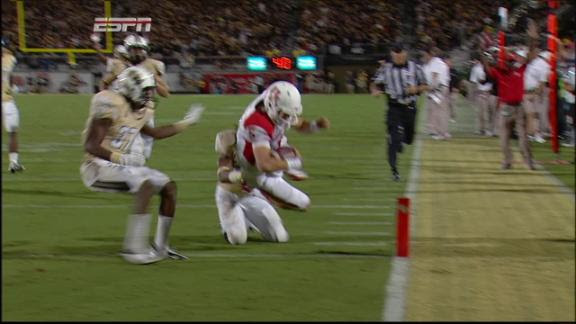 If they win them both, they would be in the driver's seat for the inaugural AAC title and have the inside track for UH's first ever BCS bowl game.

We're going bowling, but it won't be a BCS one.

In their November 9 nationally televised AAC showdown with Number 21 ranked UCF, UH came 30 seconds, two dropped end zone passes and seven agonizing yards short of walking out of Orlando with a win after coming back from a 19-7 deficit with 4:04 left in the game.

But the 19-14 defeat gave them their second loss of the season, their first in AAC play and dropped them into a second place tie with Louisville. 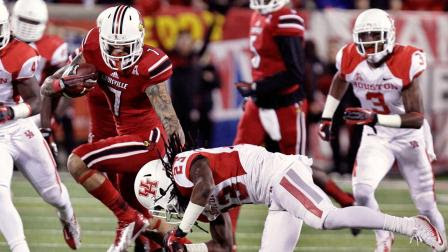 The Cougars took their 7-2 (4-1 AAC) record on November 16 to 'The Pizzeria' for their first trip to Louisville since 2003 and both were members of C-USA.   Sadly once again 13th ranked Louisville is bouncing for another conference (the ACC this time) just as we join them in the Conference Formerly Known As The Big East.

With a BCS bid still in reach for either team if they won, this first UH-Louisville tilt since 2004 was a far more competitive game than the one I had to hear about for several weeks as a Texan in Exile up there after they lost big in 2003 and 2004.

But I did talk much trash after the 2002 upset win over the Cards in Houston.

At halftime it was looking good for my UH boys.  Despite losing all world wideout Deontay Greenberry to a head injury in the first quarter, the Cougars were up 13-10 at halftime and had Teddy Bridgewater under control.   The Cards made their halftime adjustments and shifted to a runcentric attack behind junior Dominique Brown.  He rushed for a career high 137 yards on 27 carries as the Cards ate up 12:24 of the third quarter, got the go ahead TD and added a John Wallace field goal late in the third quarter to eventually send the Cougars to another frustrating 20-13 loss in the last game we'll play against the Cards until 2015.

With the Cougars at 7-3 for the season (4-2 in AAC play) and their slim hopes for a BCS bowl gone, they focused their attention on trying to end their losing skid against Cincinnati on November 23 in a soggy and cold BBVA Compass Stadium.

The temp was 40 degrees at kickoff with intermittent rain and the UH offense was as sloppy as the playing surface.

The offense once again sputtered, scoring only one touchdown and O'Korn coughing the ball up deep in Bearcat territory on UH's opening drive.  The Cougars fell behind 24-7 before starting their second half comeback.  It was jumpstarted by safety Trevon Stewart's 15 yard fumble recovery for a touchdown to narrow the UH deficit to 21-14.

The Bearcats also gave John O'Korn and the Cougars one last chance to snatch victory from the jaws of  defeat after they missed a short field goal with 1:24 left and no timeouts. But the Coogs ran out of time at the Cincinnati 32 yard line to lose 24-17 and drop their third straight game in AAC play by a TD or less and go 7-4 (4-3 AAC) on the season.

On November 29, the day after Thanksgiving the Cougars and the 'Third Ward D' feasted on our AAC instate rivals SMU and rolled them 34-0 at Reliant Stadium.

While the offense was breaking out of its malaise with a 67 yard bomb to Daniel Spencer from O'Korn on the opening play of the game, the defense was making life miserable for SMU redshirt freshman QB Neal Burcham.

They sacked Burcham five times, forced four turnovers and allowed only one Mustang trip inside the 20 yard line to post the first UH shutout since they were members of the SWC.

On December 2, 1989 the Cougars beat Rice 64-0 in their last game of the season to cap a 9-2 SWC campaign in which they finished second in the league, were ranked #14 during a probation marred season and saw Andre Ware run-and-shoot his way to the Heisman Trophy.

The Cougars finished their first season in the AAC with an 8-4 record and 5-3 in conference play to finish fourth.  Not bad considering they were picked to finish sixth and did this with a freshman and sophomore dominated line up.

While it's not the BCS bowl they had designs on when they started the year, on January 4 the Coogs will travel to Birmingham, AL to play in the BBVA Compass Bowl against their SEC opponent, the 8-4 Vanderbilt Commodores at Legion Field in what should be a fun game.

While this inaugural AAC season turned out to be much better for the Coogs and their fans than we anticipated, the future looks so bright for the UH Cougars they need shades.

In addition to those freshman and sophomores getting valuable playing time in their maiden AAC campaign, they will be playing in the new on campus football stadium scheduled to open on August 30, 2014.

And hopfully you'll be able to ride the METRORail Purple line to the stadium when the new Cougar football home opens with a game against the UTSA Roadrunners.

Now all we need is a few four and five star recruits to sign and come play in it.