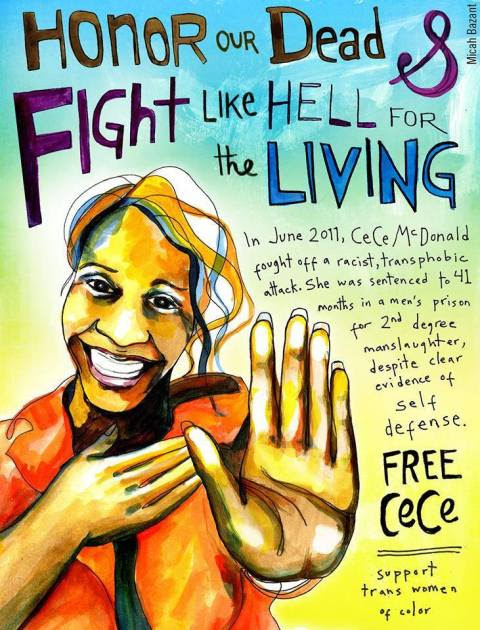 Back in June 2011 CeCe McDonald and her friends were minding their own business and headed to a nearby Target store in their south Minneapolis neighborhood.  As they passed the Schooner Tavern they were subjected to racist and transphobic slurs and a fight instigated by Molly Shannon Flaherty that resulted in the death of neo-Nazi sympathizer Dean Schmitz

CeCe ended up taking a plea deal that has her spending 41 months in jail for 2nd degree manslaughter, when there was clear evidence of self defense.  Molly Flaherty, the person who instigated this mess only served 180 days.

If CeCe hadn't 'stood her ground', there a possibility that we would have been reading her name on that year's Remembering our Dead list.   But 41 months in jail is still an unjust price to pay for defending yourself against an unprovoked racist and transphobic attack

You may wish to check out CeCe's writings at the 'Support CeCe McDonald' blog.   It also has the address for you if the mood strikes (and I hope you do) to take some time out of your busy days to write CeCe a letter or send her a Christmas card to let our unjustly incarcerated sis know that she does have trans community support..
Posted by Monica Roberts at 12:00 AM