Saber Claus Is Beating You Down 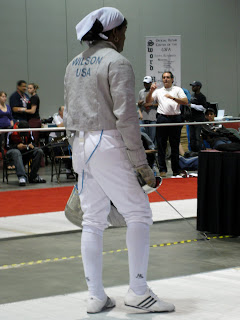 As many of you long time readers know, during my eight years as a Texan in Exile my housemate started fencing.  Polar and I got to tag along on some of her fencing tournament trips and watch her exploits.

Along the way I got to meet many of the Baby Vets and the Senior Mama's (AKA the US Fencing Association's Vet 40 and Vet 50's division fencers), many of the officials, coaches and parents in the USFA, the Kentucky Division and Great Lakes region of USFA, Maestro Les Stawicki, the LFC, Bluegrass and Knight of Swords clubs along with Uof L's fencers.

I even had the pleasure of watching the rise of a US Olympic fencer in Lee Kiefer, who was a 2011 Pan Am Games gold medalist, competed in London and fell just short of collecting a medal there.

And yes, Fencing World, I miss y'all.

So with Dawn telling me she'd be in Dallas next week for an upcoming North American Cup tournament (presuming everything's thawed out up there by then), this fencing themed Christmas rewrite came to mind.

It's not the first time I've written one of those fencing themed rewrites.   The Baby Vets unofficial theme song is one I penned to the tune of the Supremes 'Baby Love', and 'All The Saber Ladies' is sung to Beyonce's 'Single Ladies'.

So pull out your iPod's and sing along with Moni's remixed lyric as I wish all you peeps in Fencing World a hearty Season's Beatings!