California Trans Teen Tells Her Story To The School Board 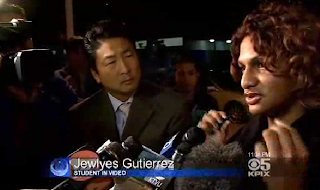 Hercules High School sophomore student Jewelyes Gutierrez got fed up with the bullying and transphobic harassment being aimed at her on an almost daily basis.  She appealed to the school's vice principal for help in stopping it, who ignored her request.

That frustration finally boiled over in the on campus November 15 fight between her and three girls egged on by other students that was captured on video, went viral and they were all suspended for it.

"I was just sticking up for myself," she said. "Because you're different, you'll get picked on, you'll get name calling, bullied, taunted, harassed -- all those."

The West Contra Costa School Board to their credit in the wake of this incident is working on a new anti-bullying policy they will vote on January 29.

Will definitely be keeping an eye on this situation.