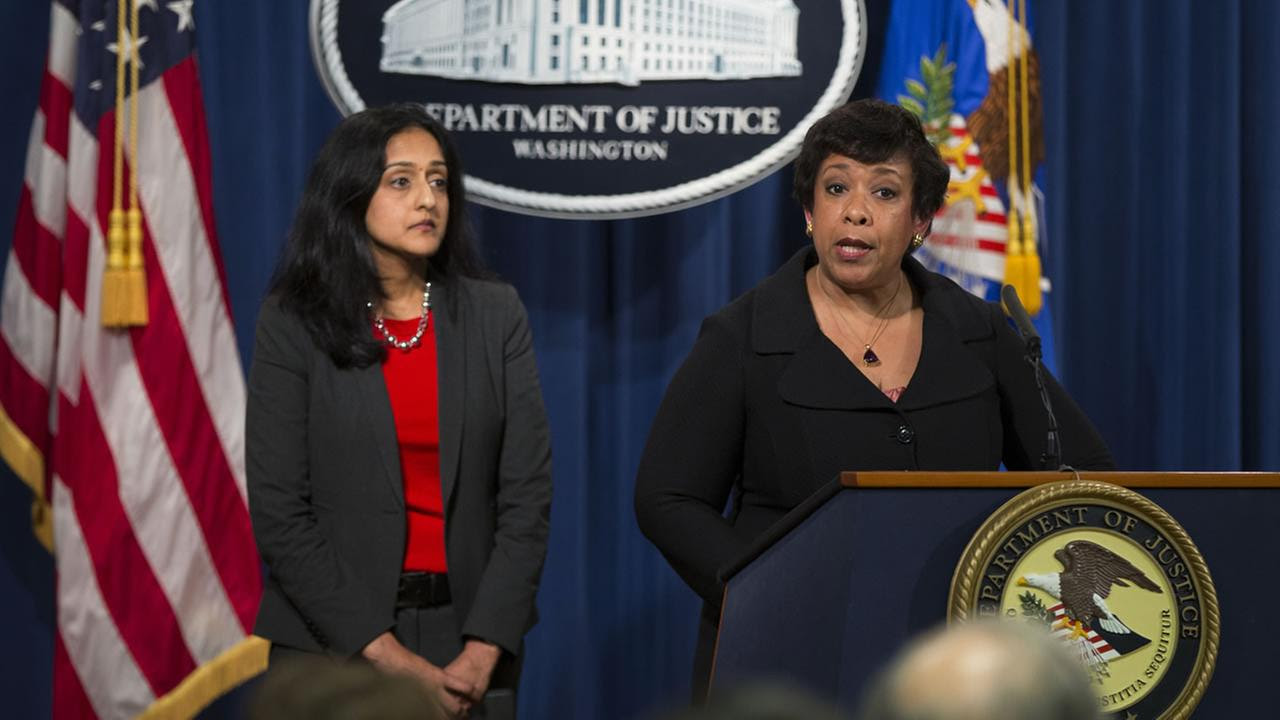 After US Attorney General Loretta Lynch made her eloquent remarks body slamming HB 2 and telling the trans community the DOJ and the Obama Administration had their backs, Vanita Gupta, the head of the Civil Rights Division of the DOJ spoke.

And yes, Trans World, her remarks deserve just as much attention as AG Lynch, since it's discussing and explaining the basis for the upcoming lawsuit.


Thank you, Attorney General [Loretta E.] Lynch, for those powerful words.  Throughout the arc of our country’s history – from tragedies of injustice to marches for equality – there have been pivotal moments when America’s leaders chose to stand up and speak out to safeguard the ideal of equal justice under law.  And history will record your inspiring words and our forceful action today as one of these moments.
I also want to take a moment to thank the entire team throughout the Civil Rights Division and the Department of Justice, who have worked tirelessly over the last several weeks to ensure that everyone in North Carolina has the full protections of our laws.
Today, we filed a federal civil rights complaint in federal court in the Middle District of North Carolina.  Before I discuss the details of our legal argument, I want to make one thing clear.  Calling H.B. 2 a “bathroom bill” trivializes what this is really about.  H.B. 2 translates into discrimination in the real world.  The complaint we filed today speaks to public employees who feel afraid and stigmatized on the job.  It speaks to students who feel like their campus treats them differently because of who they are.  It speaks to sports fans who feel forced to choose between their gender identity and their identity as a Tar Heel.  And it speaks to all of us who have ever been made to feel inferior – like somehow we just don’t belong in our community, like somehow we just don’t fit in.  Let me reassure every transgender individual, right here in America, that you belong just as you are.  You are supported.  And you are protected.
Our complaint brings legal claims under three different civil rights statutes.  Two of these statutes are long-standing protections against discrimination in the employment and education contexts: Title VII of the Civil Rights Act of 1964 and Title IX of the Education Amendments of 1972.  It is fitting that these statutes – which emerged from our nation’s long struggle to banish a legacy of legal discrimination – are now being used to defend, to uphold and to reaffirm the progress that resulted from that struggle; progress that represents America at its best, at its brightest and at its strongest.
Title IX and Title VII prohibit discrimination based on sex.  The Department of Justice has for some time now made clear that sex discrimination includes discrimination against transgender people – that is, discrimination based on gender identity.  That is consistent not only with the language of the statutes, but also with the legal interpretations adopted by federal courts – including the appellate court with jurisdiction over the state of North Carolina.  There is nothing radical or even particularly unusual about the notion that the word “sex” includes the concept of “gender.”  Transgender people are discriminated against because their gender identity does not match the sex they were assigned at birth.  H.B. 2 denies transgender people something that all non-transgender people enjoy and take for granted: access to restrooms consistent with their gender identity.  That’s sex discrimination, plain and simple.  This view is only confirmed when proponents of measures like H.B. 2 misinterpret or make up facts about gender identity.  Here are the facts.  Transgender men are men – they live, work and study as men.  Transgender women are women – they live, work and study as women.
Our Title VII claim is brought against the state and governor of North Carolina, the North Carolina Department of Public Safety and the University of North Carolina because of sex discrimination in employment.  Our Title IX claim is brought against the University of North Carolina because of sex discrimination in its education programs.
We also bring a claim under the Violence Against Women Act, or VAWA, a more recent statute specifically designed to prevent discrimination against transgender people by entities that accept certain federal funds.  As with Title IX, entities that accepted federal funds under VAWA – including UNC and the North Carolina Department of Public Safety – pledged that they would not discriminate on the basis of sex or gender identity.  Our complaint seeks to enforce that pledge and hold those entities accountable for the discrimination required by H.B. 2.
Even as we seek that compliance, we remain committed to working with any agency receiving federal funding to develop a plan to ensure their compliance with federal law.
For the reasons I just highlighted, H.B. 2 violates the law.  But H.B. 2 also threatens the values that define us as a people.  These values are timeless.  These values say to all people that you can be who you are, and you deserve to live with dignity.
The complaint filed today seeks to enforce these laws and protect these values.  At this time, the Attorney General and I would be happy to answer any questions you may have.