There are many times when I'm traveling around the country to various conferences and conventions repping my hometown and home state, I get people who have a reflexive hatred of the Lone Star State asking me and other Texans why we want to live here.

My reply back is, "Because I want my home state of Texas to have the same first class human rights as you do in this so-called blue liberal-progressive oasis."

The other standard reply is, ' Love my state, hate my GOP government messing it up."

Today I was not surprised to see the Texas Republican Party continue down the destructive path of demonizing the humanity of trans Texans by filing a federal lawsuit along with 10 other states over the recent DOE/DOJ directive on how to treat transgender students.

I can always count on the Texas GOP and my governor, lieutenant governor and attorney general to stand tall for injustice and oppression

Damn, can we get one day in the Lone Star State in which some Texas Republican isn't saying something idiotic, bigoted, homophobic, transphobic or racist?

Can I also have one day in which a Texas Republican isn't standing in front of a microphone or a television camera gleefully showing off their desire to tap into their inner transphobe?. 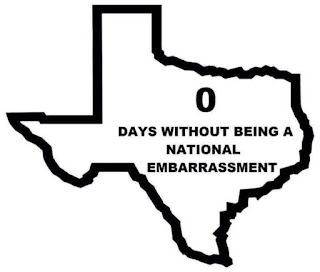 Oppressing a group of Texans for your own nefarious political purposes once again shows the bankruptcy of conservatism and its ongoing historic pattern of opposing human rights for anyone that isn't a straight, white, heterosexual GOP voting male..

And yeah, Texas Republican Party, #TransTexansVotesMatter.   You'll find that out in 2016, 2018 and future elections..

Judging by the recent losing track record of Texas attorney generals in federal court lately, I'm confident that once again human rights common sense will prevail and we transgender Americans will come out the winners.
.
Posted by Monica Roberts at 3:30 PM