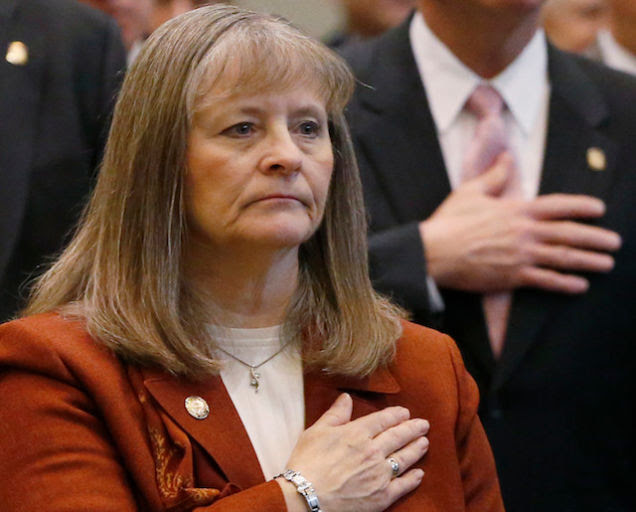 I don't like term limits for a lot of reasons for legislative and city council seats because I believe they punish good legislators who deserve longer terms in our legislative bodies.   I also dislike them because it was an idea pushed by conservatives who when they proposed them were having a hard time getting elected to those then Democratically controlled legislatures and city councils

I've seen term limits in Houston rob us of Annise Parker, who if she'd been able to run in 2015 probably could have gotten another term as Houston's mayor.

Oklahoma instituted term limits for their state legislators after passage of a ballot question in 1990 that took effect in 1992.  It slapped a 12 year combined limit on anyone elected to the Oklahoma House or Senate unless they were elected during a special election to fill a vacancy.

So why am I writing about Oklahoma term limits?.  Keep reading, because it will make your day.

The 101 member Oklahoma House has 19 members terming out in 2016.   One of the notable names terming out for those of us who are political junkies paying attention to who our enemies are,  is none other than Rep. Sally Kern (R-Oklahoma City) the racist, transphobic, homophobic, sexist, (fill in the blank) Bible-thumping Talabaptist enemy of TBLGQ  people in her home state and across the country.

Kern was elected six times to her seat, and was challenged by trans feminine civil rights attorney Brittany Novotny in 2010.  She repeatedly sponsored tried to pass anti-LGBT legislation in Oklahoma, but thanks to the hard work of activists there, she failed including this session.

But hallelujah, praise the Lord and pass the voter registration cards!. The OKC Queen of Mean is going to have to give up her House seat.   And for that I'm doing the happy dance.

So are the peeps in Oklahoma.

“I can tell you all LGBTQ Oklahomans look forward to Rep. Sally Kern’s last day in public office,” said Toby Jenkins, the executive director of Oklahomans For Equality in a Tulsa Word interview. “She has given 12 years of constant attack against gay, lesbian and transgender Oklahomans.

But before she split, she got uninterrupted time on the Oklahoma House floor to say goodbye, and Kern used that time according to The Advocate to launch one last anti-LGBT rant on her way out of the chamber


"In 2008, I did say the homosexual agenda is worse than terrorism," Kern told her legislative colleagues on Wednesday. "I didn't apologize in 2008, and I don't apologize today.".
And we in TBLG World aren't apologizing for being happy your Talabaptist behind is leaving office.

Bye, Sally.  Hope you stay retired from politics.  But I have the sinking feeling you're going to try to take this homophobic act national..