2016 Williams Watch-Rolling To The Fourth Round 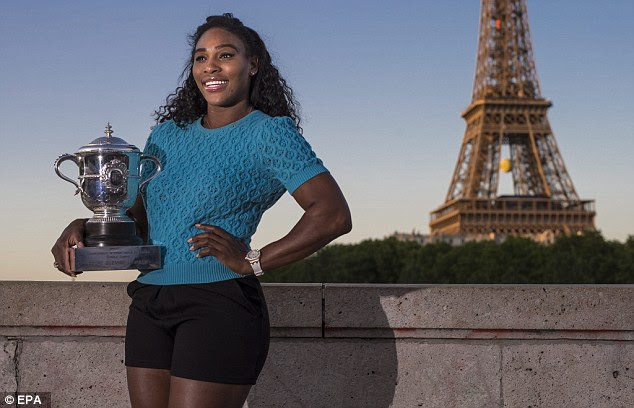 My fave tennis playing sisters are having a marvelous business trip to Paris so far as we cruise into the second week of the French Open.

Serena is chasing history and another French Open title as usual, while Venus is striving to get back to the elite level of tennis she was playing before she was diagnosed with the autoimmune ailment that has sidetracked her for several years.

This 2016 French Open women's tournament has already witnessed nine seeded players fall in the first round, two in the second and another nine in the third round.   But two of the ten seeded players still left in this 2016 edition of the French Open women's tourney have the last name Williams, and eight of them are bumping heads in the fourth round.

Serena, the tournament's number one and still world number one ranked player is handling her French Open business, and so far hasn't dropped a set on the way to the fourth round and hopefully her fourth French Open title.

She took out Slovakia's Magdalena Rybarikova in straight sets 6-2, 6-0 in her opening round match,  Brazil's Teliana Pereira 6-2, 6-1, and 26th seeded French homegirl Kristina Mladenovic 6-4, 7-6 (12-10). She will face 18th seeded Elina Svitolina of Ukraine in her fourth round match.  .

Should she get past Svitolina, she would face in the quarters the winner of the match between 12th seeded Carla Suarez-Navarro of Spain and Kazakhstan's Yulia Putintseva.

Ninth seeded Venus is trying to win her first ever French Open title in her illustrious career.  But her road to that first title and the fourth round has been tougher.  Big Sis has had to play several tiebreakers on the way to her fourth round match with number eight seeded Swiss miss Timea Bacsinszky.

She played a tough opening round match with Estonia's Anett Kontaveit, prevailing in straight sets 7-6 (7-5),7-6 (7-4).   Big Sis then sent fellow American qualifier Louisa Chirico to the sidelines by beating her in straight sets 6-2 , 6-1.

In the third round, like Little Sis, she faced a French homegirl in Alize Cornet.   But unlike Serena, it took her three sets to win this match.

Venus captured the first set 7-6 (7-5), dropped the second set 1-6, and blitzed Cornet in the third set 6-0 to punch her ticket to the fourth round match with Bacsinszky.

Should Venus survive this match, she would take on in the quarters the winner of the match between the Netherlands Kiki Bertens and 15th seeded Madison (I'm not Black) Keys

Should my fave tennis playing sibling survive their quarterfinal matches, they would play each other in the semifinals..

The Williams sisters were also entered in the French Open doubles this year, but were knocked out in the third round of the doubles tournament by Kiki Bertens and Johanna Larsson in straight sets 3-6, 3-6.

We'll see how this second week of their Paris business trip plays out and if one of them is holding the Coupe Suzanne Lenglen on Saturday.
Posted by Monica Roberts at 12:00 PM