The Confederate Flag Is A Racist Flag 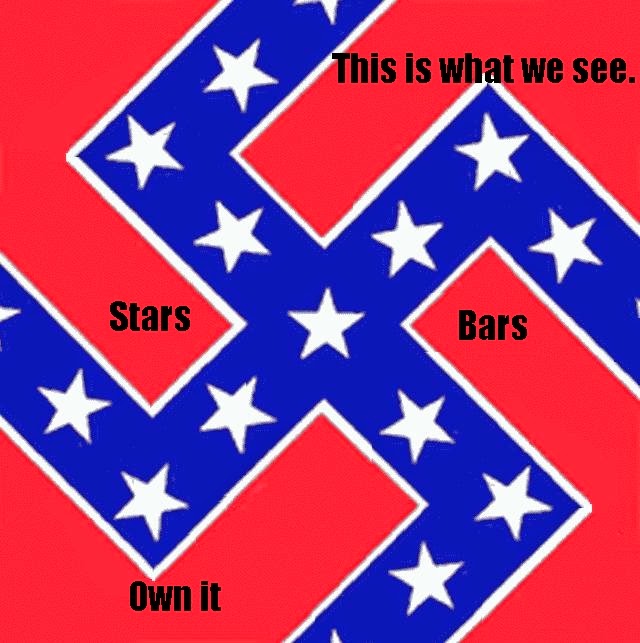 He commented on it, and a white ally chimed in that maybe this person wasn't racist, but was expressing their Southern pride.

That comment innocent as it was, still pissed off many of the non-white peeps on that thread who have experienced discrimination and hatred aimed at them from people who had it on their vehicles or as jacket patches.

'The Confederate States of America existed for one purpose: They were traitors who fought an armed rebellion against the United States government for the purpose of keeping my ancestors enslaved for perpetuity. Had they won the Civil War, my grandparents, parents and yours truly would probably be working on plantations and in big houses across the Confederacy   Texas would be under that flag, not the Stars and Stripes.  That flag is as offensive to me as the Nazi swastika flag is to our Jewish friends. And it isn't an accident that the segregationists used that same confederate flag to symbolize their opposition to the Civil Rights movement of the 50's and 60's and it's making a comeback at Tea Klux Klan rallies. So no, there is nothing noble or warm and fuzzy about the CSA or that reprehensible flag.'

This blog wouldn't exist either had the Confederacy won.


There was nothing noble about the Confederate States of America because they were on the wrong side of history and willing participants in a monstrous crime against my ancestor's humanity.  Confederate Vice President Alexander Stephens clearly spells out what the main reason was for the secession and initiation of the War To Perpetuate Slavery was all about in his March 1861 'Cornerstone Speech'. 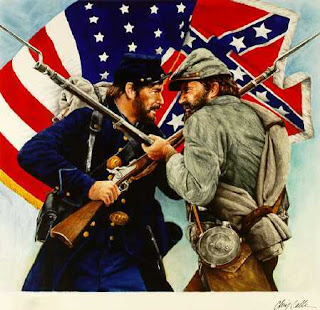 And yes, the CSA states seceded over slavery and started the Civil War to keep my ancestors enslaved.  The causes of secession for the states of Georgia, Mississippi and Texas along with the comments of Southern politicians of the time clearly point that out.

And I'm tired of people wanting to regurgitate that Southern revisionist 'happy darkie' bull feces, the war was about tariffs, the North started it, 'heritage not hate', or the lie that 'thousands of Black soldiers' fought for the CSA.  It's even more important the Southern revisionist history crap be debunked, especially as the 150th anniversary of the American Civil War continues through the rest of this year and through the April 9, 2015 date I may have to throw a party on.

What's that day you ask?  The day the CSA surrendered to end the Civil War.

When I see the Confederate flag, I see the pain of 246 years of chattel slavery.  I see Jim Crow segregation.  I see a Freedom Rider bus burning.  I see the bombed 16th Street Baptist Church and four dead little girls who entered that building to attend church.  I see fire hoses and police dogs being unleashed on defenseless protestors in Birmingham.  I see 'Bloody Sunday'

I see along with many African-Americans a racist flag from a failed nation state that fought a war to keep enslaving my ancestors, and there's no sanitizing that.

Abraham Lincoln expressed much the same idea in his debate with Douglas when he said he was in favor of his race having the superior position. He also alluded to the Corwin Amendment in is inaugural speech of 1861 . Look up the Corwin Amendment. it passed by the way. to judge everyone who flys the flag of the confederacy the same is no different that judging someone by the color of their skin. that's just wrong. there are black men whose ancestors fought for the South that are members of the Sons of Confederate Veterans,Nathan Windbush for one, whose ancestor rode with Nathan Bedford Forrest. ( look him up on Youtube). Just ask the neighbor why he flies the flag or what is is in his heart . You might be surprised at the answer.I might not change your mind about the flag, but would be happy to honestly discuss its history with you.LIncoln even said and the congress passed resolutions stating the war was not about slavery but preserving the union. The 1863 emaciation proclamation only freed slaves in areas still in open rebellion, but not under U.S. control. this document also caused rioting in NYC and desertion among some US troops who would not fight to free slaves. Yes. Slavery was a major cause of the war and a wrong, but it is a wrong that belongs to the whole United States, not just the south.