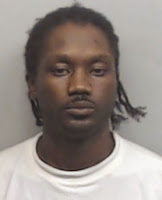 The two wastes of DNA who were caught on video attacking two African-American trans women on a MARTA train in Atlanta as people cheered and did nothing to halt it have been arrested.

34 year old Luther L. Thomas and 35 year old Frederick L. Missick have been arrested by MARTA police, charged with disorderly conduct (you're kidding, right?) and are chilling in the Fulton County Jail on $2,500 bonds apiece for attacking Janell Crosby and Tyra Woods.

Both perps were Atlanta residents.  Thomas was arrested on Thursday while Missick was picked up by MARTA police yesterday.

The May 20 incident started when Crosby and Woods were walking to the Five Points MARTA station in downtown Atlanta to catch a southbound train to Oakland City Station.  They were confronted by a group of men, harassed, and had photos taken of them while enduring homophobic and transphobic slurs..

Thomas and Missick persisted in continuing the abuse during the train ride as Crosby repeatedly told them to stop.   Thomas then physically attacked Crosby as Missick attacked Woods, who was trying to help her friend and stripped her of her clothing.

Thomas and Missick have also been suspended from riding MARTA.

The ugly incident has incensed the ATL trans community and our local allies, and Mayor Kasim Reed through spokesperson Melissa Mullinax had this to say about it on Thursday.

"The mayor condemns hate crimes of any kind and is committed to the equal rights and equal treatment of Atlanta’s lesbian, gay, bisexual and transgender residents, workers and visitors. The City’s non-discrimination laws were recently amended with the Mayor’s full support to include gender identity as a protected class," said Mullinax.

"The incident on the MARTA train is disturbing. We understand that MARTA is conducting a thorough investigation and we look forward to the authorities bringing those accountable to justice," she adds.

Two town halls are planned in the Atlanta area to discuss the incident.  One town hall is being facilitated by the group Solutions Not Punishment Coalition on June 3 at the Phillip Rush Center that will start at 5:30 PM EDT.   The second will be facilitated by Restoration Inclusive Ministries at its Decatur, GA church on June 4 and start at 7:30 PM

In the meantime, as justice is being sought in this case, Crosby decided to move back to New York as a result of this incident and Woods is staying with relatives in Cleveland, OH.

As to what outcome Crosby wants to see from this case, she replied, “I really want an apology from them and I really want the law put on them.”

And your transsisters around the ATL, the nation and the world want the same just outcome.