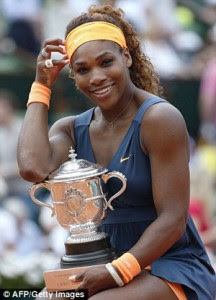 Today starts the 113th edition of the French Open at Stade Roland Garros in Paris through June 8.  The question I will have on my mind along with all international tennis fans is can Serena repeat?

I'd say it's likely after being upset in the Australian Open by Ana Ivanovic, so the French Open field needs to be very afraid after Little Sis warmed up for the French by capturing the Italian Open title which is a clay court tournament.

If Serena manages to win the French Open, she will tie Chris Evert and Martina Navratilova for fourth on the all time titles list at 18 and be only one singles title away from tying Helen Wills Moody who sits in third place.

Number one seeded Serena starts the chase for her third French Open singles title with her first round match against French homegirl Alize Lim.

Big Sis Venus is also playing in this tournament and is unfortunately on the same side of the draw as Little Sis.   She starts her French Open singles play against Belinda Bencic of Switzerland.

As to whether the Williams sisters will be playing doubles in this tournament, won't know until they post the women's doubles draw.

Will this be another successful French business trip for Serena?  Will Venus make some noise in this one?   We'll begin to find out the answers to those questions in a few hours.