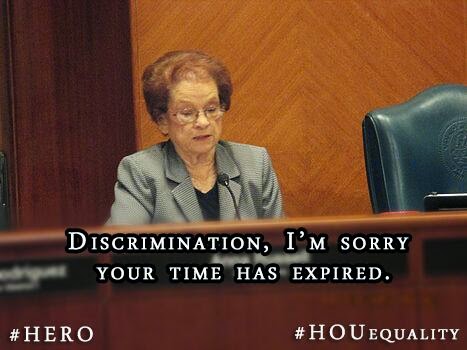 It's the big day in H-town, and I'm in City Council chambers awaiting my turn to speak and waiting to see if my beloved hometown joins the rest of the cities of Texas in passing a non-discrimination ordinance that protects all her citizens.

I've been up since 6 AM to make sure I was in line when City Hall opened at 8 AM to get my visitor's badge and a seat in the council chambers.

Besides waiting to see how this HERO vote and wading through all the one minute public comment speeches pro and con,  the ACLU of Texas legal and policy director Rebecca Robertson weighed in on this HERO battle with an op-ed in the Sunday Houston Chronicle and here were the money quotes in it.


But a law that conflicts with a personal religious belief, no matter how deeply held, is not a violation of religious liberty. Nothing in our Constitution gives people of faith a special exemption from following laws meant to protect everyone. Nor could it. In a country with as many diverse religious traditions as ours, imagine what would happen if each of us could choose, according to our individual beliefs, which laws to follow and which to ignore.

The proposed Houston Equal Rights Ordinance creates no conflict between equality and religious liberty. The ordinance claims no power to compel any of us to relinquish a sincerely held religious belief, to endorse something we believe profoundly to be immoral or to offer services of which we disapprove. That is not the province of law.

Okay, time to remind 'errbody' where we are outside of Beltway 8 in this process.  Takes nine votes to pass anything on our 16 member city council and Mayor Parker gets a vote for a total of 17 votes..

As far as the HERO whip count goes, we already have three declared solid NO votes in CM Stardig, Kubosh and Pennington.

Rumors are Kubosh may be on the Leaning NO fence, but I doubt that after his appearance at the Grace KKKommunity Church hate rally.

Leaning NO is CM Boykins.

CM Martin has the Grace KKKommunity Church haters in his backyard.  Boykins has me (that's my council member) and the liberal progressive community leaning on him on one side and Rev. Miller and his sellout haters on the other.  Hope he chooses wisely because Moni has a long memory and won't forget in November 2015. .

We'll find out how the votes shake out in this HERO battle in a few hours..
Posted by Monica Roberts at 12:00 PM