I'm finally in in Dallas for this year's edition of the Black Trans Advocacy Conference and have two panels I'm on I'm looking forward to.

First one is the sisterhood one with Espy Brown and myself and the Black Trans Community Summit later on this afternoon moderated by Tiq Milan.

But y'all know I'm quite aware of what today is and it ain't hump day.  .

Yep, time to call out this week's fool, fools or group of fools who deserve to get called out for their BS.

Say the man who wore bow ties for years.

Honorable mention number three goes to Christina Fallin, the daughter of Oklahoma Gov. Mary Fallin.
During a Norman Music Festival performance of her band Pink Pony she mocked Native American protestors of her by doing a fake war dance as her boyfriend shot the finger at them from the stage.

The Native Americans were protesting her posting of a photo on her Instagram account of her wearing a red headdress.

And you conservafools keep protesting that you aren't racist.  But you keep adding to that continuously mounting five decades of overwhelming evidence you most certainly are.  And as Christina Fallin proves, the kids are sometimes worse than their conservaparents.

Honorable mention number four goes to all the faith based hate mongering pastors who stood in opposition to the Houston Equal Rights Ordinance and violated several commandments in doing so.  Oh, you know the ones about bearing false witness, lying and then had the nerve to get butthurt about getting called out for being haters and oppressors.

News flash, you are.

Honorable mention number five  is a joint award for serial racist Donald Sterling and the LA Chapter of the NAACP     The soon to be ex-owner of the LA Clipper pissed off his girlfriend, who revealed to the world what many of us already knew in terms of his record setting bigotry.

But the head scratching part of this reprehensible was the LA NAACP being set to giving Donald Sterling a lifetime achievement award   For what.   Best Oppressor to our community?   Most realistic portrayal of a plantation owner?  Most Bigoted Conservafool?

What the hell were they thinking?
Honorable mention number six goes to DL Hugley for calling Tanee-McCall Short,the estranged wife of Columbus Short, a 'thirsty b---h.   Hugley has apologized for his comments, but that still jacked up to diss a victim of domestic violence on national radio.
Honorable mention number seven goes to Angela McGlowan, who is still trying to suck up to the Tea Klux Klan and pimp that government benefits = slavery meme.
Didn't you learn anything about how much the conservafiools really love you when you ran for Congress in Mississippi and you came in fourth behind three white male Republicans?   I guess not.

This week's Shut Up Fool is Alan Keyes.   First this kneegrow parted his lips on WingNutDaily to say that Cliven Bundy wasn't a racist and liberals 'were the real racists'.   Then Keyes doubled down on that idiocy by claiming that 'Black people were worse off now than under slavery'

Naw homes, you're not only hanging with the real racists, you've got your nose stuck so far up their anuses if they fart you can recite what they had for breakfast.   And yeah, you're still bitter the POTUS spanked that azz in the 2004 Illinois US senate race.


For that shameless azz kissing you deserve a Oreo cookie, an Uncle Ruckus and a Negro IZ U Sirius? Award 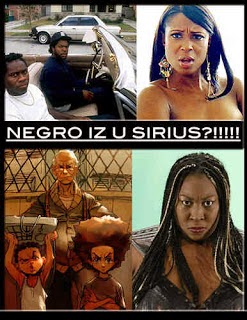