How Do Bugis Divas Grow Old? 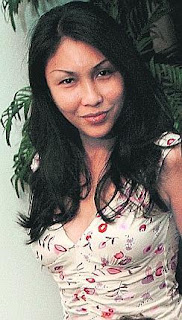 TransGriot Note: In the 50's, 60's and 70's, the undisputed home of the most beautiful transwomen in Asia was Singapore. Ground Zero to find them was the various clubs on Bugis Street.

In the mid 80's the Singaporean government tore up the area to build a subway station. The reconstruction of the area put an abrupt end to the world famous nightlife that had evolved over the past three decades. In the process, Thailand became the Asian capital for transgender nightlife and as the Singaporean government discovered, grabbed the tourist dollars that came with it.

Here's an interesting article about some of the ladies and how they are gracefully aging.

DEATH OF AN AUNTY 'LADYBOY'
HOW DO BUGIS DIVAS GROW OLD?

We rely on one another, say transvestites

IN the mid-1980s, she was a model, and then a fashion coordinator, and later, she took the stage as a performer at the Boom Boom Room.

Miss Amy Tashiana, a transsexual, looks you in the eye and is perfectly open about discussing her life.

She said: 'We have gone through the extremes to get to who we are, fight to live as who we feel we should be. So it is natural that we grow over the years to become very tough and fiercely independent.

'In order for a man to come along to match that and share companionship, you need someone who is really, really big.'

Does that mean loneliness as they grow older?

Some of the first generation Bugis street transsexuals and transvestites are in their 60s today, like Mr Abdul Khalid Othman, the 61-year-old who was murdered, allegedly by a lover less than half his age.

One transsexual in her mid-50s said: 'When you grow older, sex is no longer important. Like normal people, we seek companionship.'

Some from Bugis Street left to open clothing and jewellery shops, but return occasionally to visit the 'sisters'. 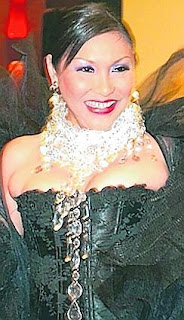 When this reporter first met Miss Tashiana in 2001, it was at a talent management company. Then, everyone called her a diva.

But when The New Paper on Sunday met her again last week at a hawker stall, she looked very different.

She was tidying up the food stall, pushing a cart, with curry stains on her white T-shirt.

When asked how come she looked so different from her days of glamour, she replied: 'No lah, just helping my friend out at her stall for a few days.

She laughed, pulling at her cream-coloured shorts.

So, was she once the queen of Orchard Towers?

She explained: 'Orchard Towers is a beginning for many of us. Everyone has a beginning when they learn to be a woman.

'Some were teenage girls in secondary school having crushes on boys, learning how to wear heels and put on make-up, and slowly maturing to become a woman.

'We don't have that luxury of time. So we jumpstart our lives at Orchard Towers, dressing flamboyantly, wearing every accessory we can, eager to show breasts and other assets. But that is just the beginning. Nobody wants to be there their whole lives.'

Where, then? With a man?

'After all the people I met in my life, I would find typical Singaporean men extremely boring,' she said.

'We would have nothing to talk about. I need someone bordering towards the extreme.'

There are those who find love.

Said Madam Fiona, 55, (not her real name), a transsexual happily married to a Singaporean: 'The men have to be very strong to stand for his right to love whom he wants.'

Some have gone overseas. In Europe, for instance, they find more acceptance in society.

Another transsexual, Madam Shanu Rekha, who is also in her 50s, is married to a European man 20 years younger. They live in Denmark with two adopted children.

Miss Tashiana herself has been single since 2005, after two serious relationships of three years with a Singaporean and an English man. Around the time of her last breakup, she bought herself a three-room flat in Eunos. Owning her own place is a dream come true.

It's a neat and cozy place, with dark wood furniture, where she lives with at least two well-fed cats.

She has paid off her breast implants and sex-change operation. And now, she is gaining in years gracefully.

Discos don't gel with her lifestyle any more. She said: 'I don't hit Zouk. I stay home and relax, go to photo exhibitions and art galleries. My health is the most important. I do intend to have a boyfriend but I am more fussy about letting a person into my life.'

There is no such thing as 'auntiehood' according to Miss Tashiana.

'I live my life to the best of my ability. Depression can hit anyone, even married women. If you go along with it, you will age,' she said.

She does not crave having her own family but thrives on the support of a tightly-knit group of middle-aged transsexual friends, much like how the characters from Sex And The City lean on each other and value their friendships as they near 50.

'And I am thankful I don't have to deal with things like pregnancy, menstrual cycles and menopause,' she said.

But like so many of the Bugis Street transsexuals who have gone overseas, she too is planning to venture abroad for love, perhaps when she hits 50.

'I just have to give myself a chic, short crop and I will look younger than most people my age in a European city. Singapore is too small,' she said.

'Look at the older Singaporean men looking for China women or going to Batam to look for mistresses.

'What about me? I can go to Europe, find someone younger than me by 20 years.'

Referring to Mr Abdul's murder, she added: 'Don't isolate him in his situation. The chee ko pek (Hokkien for dirty old man) exists in everyone. Not just transvestites and transsexuals.

'People mix with those who are younger to make themselves feel younger. You want to buy a product that's better than yourself.'
Posted by Monica Roberts at 6:56 PM

Hi Amy,
while reading this article,I am very proud of knowing that you are someone that still carry on for the transgenders histories of Singapore.Do keep up the good work.
YOU GO GIRL!