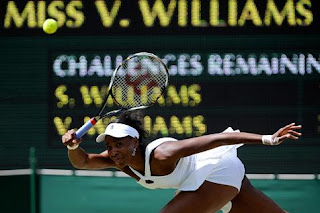 Those of us who are big fans of the tennis playing Williams sisters were not only hoping for a Sister-Sister final, we got it. We were also hoping for an entertaining and competitive final, and we got that as well.

The way she's collecting these the All England Club may need to consider renaming it the Venus Williams Rosewater Dish.

But this match was the bomb. Prior to today Serena had taken the two previous Sister-Sister Wimbledon finals and early on as Venus struggled to control that powerful serve of hers as the high winds played havoc with her ball toss. Serena took advantage of Big Sis's service struggles and got the upper hand early in this match. But as Venus began to find the range and settle down she and Serena battled each other by pulling out shot after amazing shot at critical points in the first set.

But it was Little Sis who made the critical mistake of the first set, putting the ball in the net with Venus up 6-5. Despite outplaying Venus, she'd dropped her first set of the tournament. 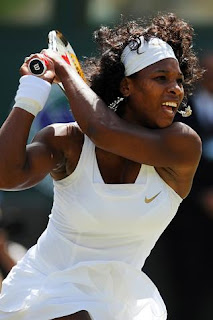 The second set would be just as competitive. Serena battled back to force a break point, but Venus uncorked another monster serve to save it and set another Wimbledon service speed record in the process at 129 mph.

The sisters continued their nip and tuck battle in the second set until finally Venus built a 5-4 lead and had two Championship points in the tenth game of this set. Serena sent an ace blistering past her sis to save the first point but on the next one hit her return wide to end a match for the ages and strike a blow for the pride of older siblings all over the planet.

The sisters have one more match to play at the all England club for the Ladies' Doubles Championship. The way they're playing right now they'll probably take that title home with them as well.

Althea Gibson is looking down at these ladies and smiling. They gave it their all and definitely made us all proud of them today.

Great battle. I loved the six deuce points. Wow, talk about edge of your seat.
The classy Williams sisters always give props to Althea Gibson.
They won the doubles too. Woohoo!

Yep, now on to Beijing!

I sit corrected. They have learned how to get past the sisterly love and go all out against each other.

Boy did they ever, Caprice.