The Beijing Games motto is One World, One Dream. With the Games starting on August 8, a few players are closer to their dream of wearing an Olympic gold medal around their neck.

Others whose dreams were dashed will pick themselves up, refocus and aim toward the 2012 London games.

During Olympiads the WNBA not only doesn't conduct an All-Star game, they take a month long break to allow the league's players to join their various national Olympic teams for the Games.

While attention in the US will be focused on Team USA and its quest to win a fourth consecutive gold medal, other WNBA players will be working just as hard during the break to claim the basketball gold for their country.

Hamchetou Maiga-Ba will be headed from the Houston Comets to Mali to attempt to make her national team. Kelly Santos and Erika DeSouza will be headed home to Brazil to do the same thing. 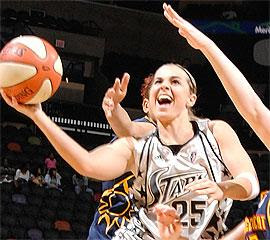 In some cases a few players will be wearing some surprising uniforms as they do so. FIBA and Olympic rules allow you to play internationally for another country other than your birth one if you've never represented your birth country in any international competition.

Because Team USA is so deep talent wise, Becky Hammond, Kelly Miller and Deanna Nolan headed to Russia where they play during the winter in order to try to win Olympic gold. Only Becky Hammond made the squad, which includes former WNBA players Svetlana Abrosimova and Maria Stepanova

That's probably going to add a little fuel to the USA-Russia rivalry because the Russians knocked off Team USA in the semis of the FIBA tournament two years ago and gave them a major scare during the 2004 Athens Games as well. 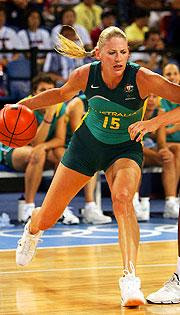 The FIBA World Champion and 2004 silver medallist Aussies are the team many see as a major threat to Team USA standing on the top step of the Beijing victory platform. The Opals kept many of their best players at home training, but Opals Tully Bevilacqua and team captain Lauren Jackson opted to make the trip from Down Under to play this season in the WNBA.

Speaking of the WNBA, the biggest surprise to the so called experts is that the LA Sparks aren't running away with the Western Conference regular season title even with WNBA Rookie of the Year candidate and Olympian Candace Parker in the lineup.

The Sparks are also going to have the problem along with the Detroit Shock of holding on while various players serve the rolling suspensions issued by the league office in the wake of the brawl that happened in Detroit last week. 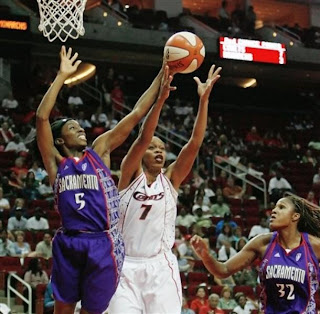 Soi when the WNBA resumes on August 28 after being put on pause for the Games, there will be a lot of exciting basketball left, especially for this Comets fan who's still patiently waiting for the Drive For Five to be completed.

My girls have caught fire after a slow start and have won their last five games in a row going into the Olympic break, and I and other Comets fans hope that trend continues.

In the meantime I'll be rooting for both Team USA's to bring home Beijing gold.
Posted by Monica Roberts at 12:05 PM