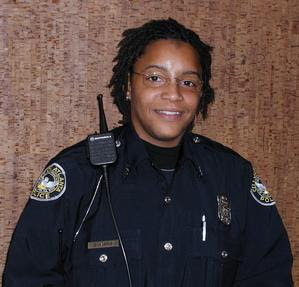 TransGriot Note: I've had the pleasure of meeting Atlanta police officer Darlene Harris at the 2004 SCC. I found this story interesting since I'm always on the lookout for stories about intersex people in order to expand my own understanding of it, and especially about intersex people who share my cultural heritage.

In front of approximately 20 people at the Midtown nightclub Halo Thursday night, the Atlanta Police Department’s LGBT liaison, Officer Darlene Harris, shared for the very first time in a public forum the journey to discovering being intersex.

“What actually happened is the young lady I’m seeing said, ‘You know, it’s not normal for you to not have a regular cycle,’” said Harris, 35, who formerly identified as a lesbian but now identifies as intersex.

But Harris had never had a menstrual consistent period and didn’t think there was anything wrong. Besides, Harris said, “You know a woman who wants to have it every month?” bringing several chuckles from the queer men and women listening.

Harris’ girlfriend, without telling Harris, made an appointment with a gynecologist early this year. Harris dutifully kept the appointment and when the gynecologist learned Harris had never had a regular menstrual cycle, she decided to run several tests to determine, among other things, Harris’ levels of estrogen and testosterone.

When Harris returned to the doctor’s office to find out the lab results, the doctor expressed concern because most of the test results came back abnormal.

“The doctor pulled everything up on the computer, and I see lots of red lettering. I didn’t know what it meant, but she said that each of these tests came back in red and for her that’s a problem,” Harris said.

The tests revealed Harris’ testosterone levels were much higher than the range for the average male. At first, the doctor worried Harris may have tumors. She began months of medical testing with an endocrinologist that eventually concluded with a chromosome test. That test revealed Harris had the XY chromosome — the male chromosome.

Harris does have ovaries and plans to have a hysterectomy — what she termed a “full cleansing” — to stave off potential future health concerns, rather than take hormones.

For Harris, who has identified as female her entire life, finding out she is a male genetically felt like a burden lifted after growing up feeling so different than everyone else, even sometimes within the queer community.

“When I came out as a lesbian, the women I dated would say something’s not right. I’d say I’m fine, you’re just small,” Harris said, referring to having an enlarged clitoris. “Of course, I said that to feel comfortable with myself.”

She said right now she is not concerned with what pronouns people use to identify her — “he” or “she” is fine. But while she has the option to legally change her birth certificate to male, Harris said she is not going to take that route because she has lived her life so long legally and socially as female.

“I decided not to ‘change over.’ I’m going to be who I am,” Harris said. “I have prayed and I need to be comfortable in my skin. Some may think it’s better to change over. At this point, after two kids, I don’t want to go through the situation explaining. I choose to stay this way.”

As a child, Harris said her mom used to tell her she was “supposed to be a boy” because that’s what an amniocentesis test revealed. And while her father called his other daughters “pretty,” he always said Harris was his “handsome daughter.”

“And that used to bug me. I didn’t understand,” she said.

Harris shared childhood memories of being potty-trained and always standing up to use the restroom. Her mother begged her to sit on the toilet, telling her that life would be hard if she went into a female restroom and was seen by someone else standing to urinate.

In the sixth grade, that did happen. The incident so embarrassed Harris that Harris finally learned to use the restroom sitting down.

Then there was the attraction to other girls.

“I knew I was always attracted to females growing up. It was natural to me. Mentally, when I dated women, I thought in male terms,” Harris said.

Since Harris was in junior high school, she has been able to grow a full beard and moustache and shaves every day. She said she also grows excessive hair on her chest and stomach —signs that someone might be intersex. Her enlarged clitoris, or micro-penis, was also a sign. But never knowing what being intersex was or having anyone to talk with about what she was going through caused Harris to keep her confusion stuffed inside.

“The reason I’m here is this is a healing process for me. It’s important to share my story,” Harris said.

“Growing up, not knowing what was going on, was hard. There was something not right. Now I know all the things I felt growing up weren’t me just bugging out,” Harris said. “If I can help just one person, this is worth it.”
Posted by Monica Roberts at 12:34 AM