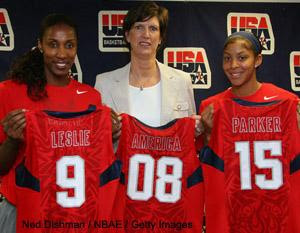 I mentioned in a post back in May that the 2008 Olympic draw to set the pools for the upcoming Olympic basketball competition were held by FIBA on April 26.

The final five are Latvia, Belarus, Czech Republic, Spain, and the Brazilians, who knocked off Cuba 72-67 in an elimination game to punch their ticket to Beijing.

So now that we know who the final five squads are, we can now fill in the group blanks.

The three time defending Olympic champion Team USA will be playing in Group B with the host Chinese, Mali, New Zealand, Czech Republic and Spain. They'll open group play on August 9 against the Czech Republic. 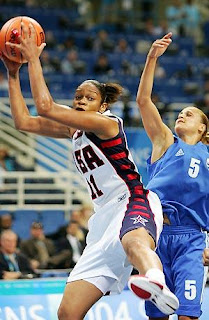 First time Olympians (and it probably won't be their last US women's team are Seimone Augustus of the Minnesota Lynx, Sylvia Fowles of the Chicago Sky, Candace Parker of the Los Angeles Sparks and Cappie Pondexter of the Phoenix Mercury. 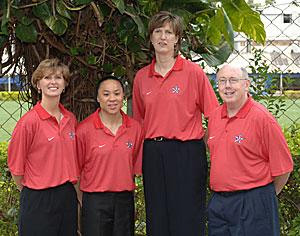 Since women's basketball was first staged as a medal event at the 1976 Montreal Games, Team USA has won five golds, one silver, one bronze and compiled in Olympic play a 42-3 (.933) overall record in seven Olympic appearances. (We didn't go to the 1980 Olympic Games in Moscow due to the boycott over the Soviet invasion of Afghanistan.)

Let the games begin, and hopefully we'll see a sixth gold medal being placed around the necks of our women b-ballers.
Posted by Monica Roberts at 9:26 PM

I can't wait! Thanks for the info, sweetie.

We're only three weeks away from the opening of the Beijing Games.