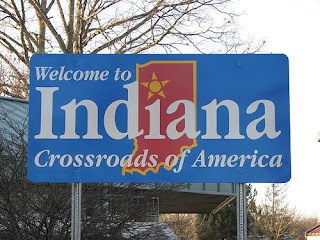 Yesterday Polar and I decided we wanted to grab a bite to eat. We were in the mood for pizza, and since both of us were off from work we decided to go run out and get some.

Actually, the reason we bypassed our favorite pizza place in Louisville (Impellizzeri's) and drove 100 miles for it was not just because we had the 'we need a road trip' itch that needed scratching,

It was an opportunity that popped up to meet newlyweds Waymon and Anthony, see Marti again (I haven't seen her in the flesh since the NTAC Lobby Day in DC last year) and congratulate her personally for being elected as a transgender delegate repping Indiana for the upcoming Democratic National Convention in Denver.

I'd also finally get the opportunity to fulfill my promise for a face-to-face meeting with Bil. 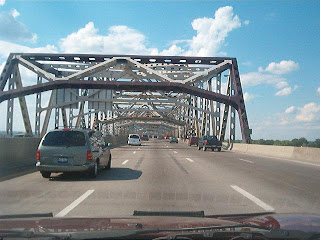 After Polar scooped me up at the house and we battled our way through the late afternoon rush hour traffic trying to get across the Kennedy Bridge to the Indiana side of the Ohio River, we stopped in Sellersburg to get gas.

It's cheaper there than it is here in Louisville, a fact that we in Da Ville gripe about every day. There's an investigation under way by Kentucky's state attorney general Jack Conway as to why we in Da Ville are paying far more for reformulated gas than our neighboring cities Indianapolis, Nashville and Cincinatti. 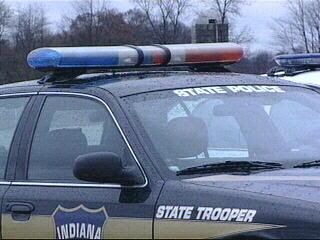 After Polar filled the tank, off we rolled northward up I-65 at a 70 mile per hour clip to our dinner rendezvous. I-65 is a major truck route and we noted the fact that like us, the truckers had pretty much slowed it down to doing speed limits these days and not because the Indiana State Police were busy patrolling the road in both directions.

We were enjoying life on the road again. Enjoying the scenery and seeing the corn grow at various heights as we passed numerous farms and outlet malls. We recounted past roadtrips as the numbers on the green mile markers on the side of the road steadily climbed up and the highway mileage between us and Indianapolis went down. It wasn't long before we reached I-465, the beltway interstate that loops Indy and headed east on it to the Washington Ave exit and our final stop at a pizza place in Irvington. 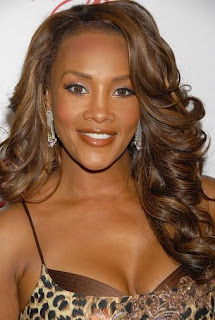 As we rode I-465 I noticed a gas price of $3.98 as we talked about the efforts of David Letterman fans back in 2002 to name the entire 60 mile I-465 loop for him. I knew from previous trips that I-65 through Indy was named for singer and Indianapolis native Kenneth 'Babyface' Edmonds and wondered if they were going to name a freeway for another Indy native, Vivica A. Fox. (I love me some Vivica A. Fox)

Polar pointed out the western end of I-465 that runs past the airport and the Indianapolis Motor Speedway is named for four time Indy champ (and a fellow Houstonian) AJ Foyt, Jr.

We finally arrived at the pizza place in picturesque Irvington and ran into Marti, who arrived at the same time we did. After we all greeted each other, we were escorted by one of the enthusiastic young servers to the patio area where Bil and the happy couple were waiting for us.

Unfortunately, Jerame wasn't there, but we did spend a wonderful few hours talking shop, plotting the next moves of 'The Gay Agenda', getting to know each other on a personal level, Waymon and I telling a few stories from our airline days, Marti and I talking about some transgender issues, and catching up on the latest political news while Polar broke out his political science degree to pontificate on it.

We also got a good laugh about the latest tired twist to the 'TBP is too Black' spin. The whispers on the GLBT Net now is that the Project is a 'Black gay website'.

All power to GLBT Black people (raising clenched fist in air). Hmm, wish I'd worn my black polo shirt and black beret for the photos now that I've heard that nonsense.

And how was the pizza?

It was great, and so were the people I was eating it with.


Crossposted to The Bilerico Project
Posted by Monica Roberts at 3:18 PM