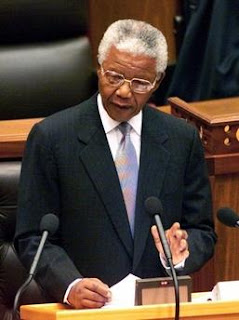 'No power on earth can stop an oppressed people determined to win their freedom.' Nelson Mandela. June 26, 1961

Today is the 90th birthday of a civil rights icon and a hero of mine, former South African president Nelson Mandela. The birthday boy is looking good and still speaking eloquently on many issues after all these years.

He's celebrating with family and friends today ar his rural homestead in southeastern South Africa. The rest of the world gets the chance to celebrate with him at a reception for 500 dignitaries tomorrow.

The man who spent 27 years of his life imprisoned on Robben Island for fighting apartheid, became the first president of a post-apartheid South Africa. He is one of those rare people who transcends their national boundaries to become a citizen of the world. 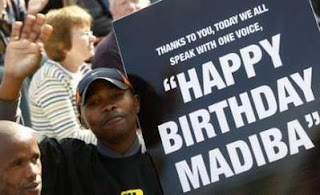 Nelson Mandela is an inspiration to me as I and others work to not only help transgender people gain their constitutionally guaranteed rights, but have their humanity respected as well.

Just as Dr. King and the African-American civil rights movement served as a model for the anti-apartheid freedom movement for my South African cousins, I look to both movements for lessons that will help us achieve our goals.

Mandela's birthday reminds us not only that one person can make a difference, but one person can also inspire a nation to do what many people and nay-sayers claim is impossible.

As they reverently call him in South Africa, happy birthday, Madiba. May the birthdays that God continues to bless you with be happy ones.
Posted by Monica Roberts at 6:31 PM