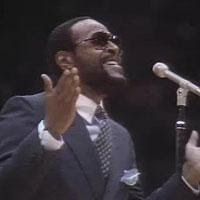 Today is our country's 234th birthday. Later tonight, depending on where you are, there will be fireworks, celebrations, and concerts galore.

We African-Americans love this country too. Enough to bitch and make it better, but that's a whole 'nother post.

We've all heard the national anthem being sung in myriad ways, but every now and then you hear a version of it by a singer that just makes you stop in your tracks, tear up, or just wanna testify. Some of those anthem versions have been sung by peeps that share my ethnic heritage.

As far as anthems with soul, this is hands down the version I consider the best. Marvin Gaye sang this version at the 1983 NBA All-Star game in Los Angeles. Unfortunately it would be one of his last public appearances before he was tragically shot to death by his father on April 1, 1984.

The best anthem with soul, version 1.1 is Whitney Houston's done before the 1991 Super Bowl in Tampa. It was done with the political backdrop of a major troop buildup happening in the Middle East and Desert Storm about to jump off.

Here's Mariah Carey's at the 2002 Super Bowl in New Orleans, only a few months after the 9-11 attacks.

Did you think I was gonna leave out my Houston homegirl Beyonce Knowles Carter?

Once again, another Super Bowl, the 2004 one played in Houston. And who better to sing the national anthem than one of our hometown Grammy winning girls? (Yolanda Adams wouldn't have been a bad pick either)

The 2004 MLB All-Star game in Houston. Fantasia sung this version, although at the time I was channeling my inner Maya Wilkes. I felt since the game was being played here, we should have had a Houston homeboy or homegirl sing it. But Fox was televising the game, and they have this maddening tendency to stick their American Idol singers in these slots to cross promote the show (which I hate with a passion). I quit bitching after the first few notes.

The 2006 NBA All Star game in Houston. The national anthem singers for this event? Destiny's Child. Y'all better recognize that Houston's got talent.

As of yet I haven't found the video of the all-harmonica version Stevie Wonder played before the Super Bowl in his hometown of Detroit. When I do it's definitely going on this post.

I hope I've made the point that love of country is not just for white conservative 'christian' Republican males. There are 300 plus million of us multricultural souls living inside and outside the borders of this piece of planet Earth we call the USA. There are thousands of others serving in our military around the world. Thanks for all you do and the personal sacrifices you make to serve our country.

At the first practices of the 2008 Olympic men's basketball team, Mike Krzyzewski brought a boombox, with burnt disk of Marvin Gaye's 1982 NBA All-Star game rendition, and the team decided that it was the version they most wanted to hear when they win in Beijing.

Whitney's was great, of course, but was prerecorded, much more pop than soul, and more than a bit overproduced. It still was a great moment, and great record.

I must admit that, after hearing
many singers attempt and fail to do justice to "The Star-Spangled Banner", I tend to favor instrumental versions, or versions performed by groups. I cannot recall the occasion, but Boys 2 Men did it very well once. I am surprised you left out Stevie Wonder's classic rendition from the 2006 NBA All-Star Game in Detroit - on harmonica, backed with a string quartet. The string quartet might not be soul, but anytime that man blows into a Hohner, I'd say it qualifies.

Or, perhaps, the rendition of Grover Washington, Jr, on sax, when the NBA All-Star Game was held in Philly in the mid-1980s. Maybe more jazz than soul, but it was all there.

Or, perhaps, Jimi Hendrix playing it, with full feedback, at the Monterrey Pop Festival in 1967. The version at Woodstock wasn't as good.

Haven't found the video for that Stevie performance yet

Wow, great post! There's nothing like listening to some fantastic singing to get the day started off right.

YouTube removed the Stevie Wonder performance at the NBA, but you can find it if you copy / paste this address: http://ozalisharmonica.multiply.com/video/item/10/Stevie_Wonder_-_NBA_Finals_-_National_Anthem

I hope that's what you were after, either way, it's a great performance