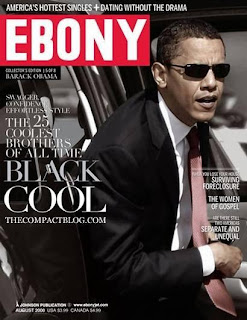 While on a Blue Bell ice cream run I happened to see at the checkout counter the August 2008 issue of EBONY magazine. The EBONY editors decided to do a story identifying the 25 coolest brothers of all time (and no, Morris Day didn't make the list).

The copy I bought has Prince on the cover. There are seven other collectors editions of this issue of the magazine that feature Muhammad Ali, Marvin Gaye, Samuel L. Jackson, Jay Z, Denzel Washington, Billy Dee Williams and the potential next president of the United States on the cover.

So since I spilled a few of the names that EBONY finally came up with, here's the full list.

Prince is just too damn cool.

I am surprised that Morris Day didn't make the list, but I don't have any argumets with the people they came up with.

I defiently see Miles Davis as the coolest of all time. He was infact the "Birth of the cool", and a huge lady's man.

Miles was the definition of cool.

Sexy I feel is another whole diferent category all together. Alot of people mix the too.

But my vote goes to Miles Davis.

What about Sly Stone, the connoisseur of cool. What's going on here?