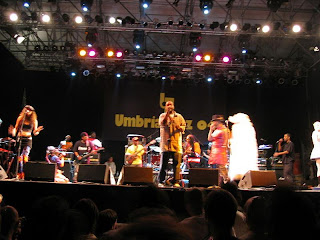 Later today I'll be taking a refesher course so that I can maintain my Doctorate of Funkology.

Yep, I'm a serious Funkateer. and this evening Parliament-Funkadelic is headlining a free concert at Waterfront Park's Great Lawn as part of the Waterfront Independence Festival. It's been advertised on Magic 101.3 for a week (yes, we have Black radio stations here in Da Ville), and it's been a major topic of discussion for those of us who remember the heyday of Parliament-Funkadelic and how cutting edge their music was (and still is) back in the day.

My love of P-Funk started when I was in the 8th grade. My Dad came home from work that afternnon, tossed a promo album in my room and said, "You need to be listening to these guys."

The album he tossed in my my room was Parliament's 'Mothership Connection'. I took it into the den, put it on our quadraphonic stereo turntable, slapped on my headphones and the rest is history. From that day forward I eagerly awaited their album releases and didn't miss a Parliament-Funkadelic concert whenever they hit town. One of the first concerts I was allowed in my teen years to go to unsupervised by the parental units was a P-Funk one at The Summit.

I enthusiastically watched a documentary late one night that was done about the P-Funk phenomenon on PBS called Parliament-Funkadelic - One Nation Under A Groove for Independent Lens. The website for it even has a trivia quiz that tests your P-funk knowledge.

Far from faking the funk, I revel in it. I'm looking forward to seeing one of my favorite bands perform once again on the banks of the Ohio.
Posted by Monica Roberts at 8:14 AM

Funny thing: I fired up XM "Deep Tracks" the other night, after work at 2AM, for the drive home. Deep Tracks usually plays a lot of progressive rock, primarily album cuts that are seldom heard, or bands that aren't played on rock radio anymore. I was just in time for a live rendition of Funkadelic's "Maggot Brain", complete with 12 minute guitar solo. Fine, inspiring music for 2AM driving.

Enjoy the show tonight! Maybe they'll play "Maggot" again when I get off at 3AM tonight.

When I got off work yesterday I fired up my 'Funkentelechy vs the Placebo Syndrome' CD,

That's still one of my fave Parlaiament albums.

That's it ! In November I voting for the Roberts/Obama ticket.Here's one little known fact, after "One Nation Under a Groove" ,Bootsy was too busy to record for them .So another Ohio native Walter "Junie" Morrison played and recorded "Uncle Jam Wants You" all by himself. I just found that out a month ago."Junie" also played in the Ohio Players.OT, try and go to the 'spear chat room and see if you can get in. that's how I found out I was a "made member". People were so busy and stuff happens.BTW, you are a "made member" too. Just ask them,later.

That Funkadelic album was the bomb as well.

It's only so much I can say here, talk to Wayne,you're in.I can't talk about "Fight Club" business because there's is no "Fight Club".BTW, are you a "Maggot" as well(P-Funk jargon).Whatever happens you're on my blogroll.

Question: What do you do when an ex-CIA guy (NoQuarter Larry C.Johnson) sends you a e-mail?It happen to me.

I'm adding yours to my blogroll as well fellow Funkateer.

BTW, if you want to see what a Roberts Administration would look like, check out

Think! Think! It ain't illegal yet!

Marry me. Damn you're funny.So you're a "Maggot" too.At least two people in America got that.I love funkateers. To be real with you ,you're my "first" funkateer , on the 'net.This is fun , now back to what Rusty Limballs do to us.YOU'RE TA' BOMB. later.

In case you didn't get that last remark that's what we call Rush Limbaugh you can also use Pigboy too.He might be coming to Cleveland soon for voter fraud.A three month vacation in the county jail, I think he deserves it.

Seems like the conservaliars have a problem with following the law.

Ann Coulter's been caught red-handed in term of voter fraud. The only thing keeping her out of jail is the Florida GOP.