Are The US Mens B-Ballers Ready For Beijing? 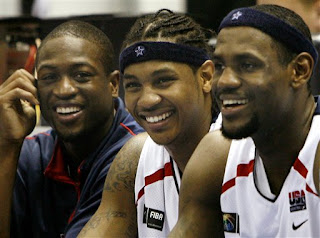 The Men's Olympic basketball tournament kicks off on August 10. The question on just about everyone's minds in the States is will Team USA not only be ready to play, but bring the gold medal back to the United States?

They'd better be, since their opening game in Group B play will be against Yao Ming and the host Chinese. Coach Mike Krzyzewski and team tricaptains LeBron James, Dwyane Wade, and Carmelo Anthony will be making sure they are. In fact, LeBron James has guaranteed that Team USA will bring back Beijing gold. But their road to gold won't be easy. In addition to the 2004 Athens Games bronze medallists having to play Yao Ming and the Chinese team, Group B also includes Dirk Nowitzki and the Germans, Pau Gasol and the current FIBA World Champions Spain, perennial Africa Zone champion Angola and Greece.

And that's just in their group. Group A is even nastier with Manu Ginobili, Luis Scola, Andres Nocioni and the defending 2004 Olympic gold medallist Argentina, the Australians, the always tough Lithuanians, Andrei Kirilenko and the Russians, the Croatians, and the surprise Asian Zone champions Iran.

Over the course of the next two weeks, we'll see if Team USA can restore some of our lost luster as the preeminent world basketball powerhouse.
Posted by Monica Roberts at 11:01 PM