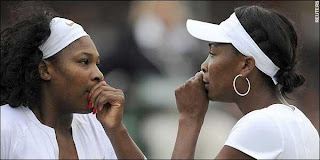 On my Wimbledon 2008 post one of my readers expressed her hope that both Williams sisters not make it to another Wimbledon final because she felt they didn't play well against each other. I was fairly confident it would happen because both had been playing great tennis so far and neither had dropped a set.

I got my wish. This Saturday as our British cousins are eating their strawberries and cream, Serena and Venus Williams will battle it out on Centre Court for the Venus Rosewater Dish (no joke) in their third all-Williams Wimbledon final.

Defending Wimbledon champ Venus took out fifth seeded Russian Elena Dementieva 6-1 7-6 (7-3) to punch her ticket to the final. Baby Sis had a tougher time battling rain delays and 24 year old wildcard Zheng Jie. Zheng gave it her all and even had an opportunity to take the second set in her attempt to become the first Chinese player to make a Grand Slam final. She eventually lost 6-2 7-6 (7-5) after Serena saved that set point and took it to a tie breaker.

Serena will be seeking her ninth Grand Slam title, while Venus will be looking for her fifth Wimbledon title. Serena has beaten Venus in their two previous matchups in 2002 and 2003.

And don't look now folks, the Ladies' singles title isn't the only championship they are pursuing at the All England Club. The Williams sisters are in the Ladies' doubles semifinals as well.
Posted by Monica Roberts at 6:32 PM

Good post. I can't wait til Saturday. The only problem is I am pulling for both of them.

I love them both, but i tend to root for Venus in these Sister-Sister matchups since she's the older sibling andf I'm the eldest child in my family.

Yesterday, Martina Navratilova made some interesting comments - she feels that the Williams sisters each would have beaten her in her prime at Wimbledon. She feels that Venus has the better serve, while Serena's backhand and footwork are better. She also admitted that she'd have loved to have coached them, and that Billie Jean King, also, has expressed great admiration for both their games, and their on-court demeanors.

Enjoy the match, it is bound to be memorable.

As I expected, the Williams sisters will be battling another American doubles pair, Lisa Raymond and Samantha Stosur for the Wimbledon doubles crown as well.