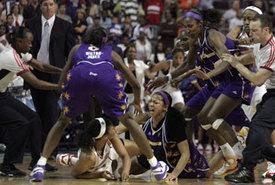 Some people are erroneously stating that what transpired in Detroit last night is the first WNBA oncourt brawl.

As a Comets fan, I have no love for the Los Angeles Sparks. I have to guard against allowing the sarcastically nasty nickname some Houston fans have for that LA WNBA franchise from drifting into my WNBA posts from time to time.

Much of the dislike of the Sparks from a Comet fan's standpoint stems from not only the fact it was the hated Sparks that ended our attempt to fivepeat in 2001, but the 1999 WNBA Western Conference Finals. 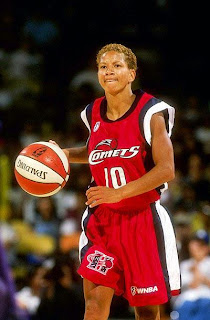 During that final our emotions were still raw and reeling from the untimely cancer death of beloved Comets point guard Kim Perrot. The Comets flew from burying Kim in her hometown of Lafayette, LA straight to LA to play the Sparks in Game One and got beaten badly 75-60. In the process Lisa Leslie, DeLisha Milton and the rest of the Sparks were saluting each other and whooping it up on the bench as they took a 1-0 lead in the series.

They forgot they had to play Games 2 and 3 at Compaq. The Sea Of Red was angrily watching the hijinks in LA on TV back in H-town, interpreting the salutes as disrespect and circling August 29 on the calendar.

A sold-out and surly Compaq Center crowd awaited them. Every time Lisa Leslie touched the ball we booed her. We spent most of a very festive night hollering 'Beat L-A' and cheering about the 83-55 beatdown we put on the Sparks that evened the series and Comet fans saw as payback for the events of August 26.

The Comets beat them 72-62 on August 30 to clinch the WNBA Western Conference title in a game that was closer than the final score. Once it was clear the Comets would be moving on to the WNBA Finals and the '3 for 10' bid was still alive, after Sheryl nailed a three to expand a late Comets lead, Tina Thompson and Sheryl Swoopes saluted each other as they were running back up court. Lisa shoved Tina and it was on like Donkey Kong. It added more gasoline to the rivalry and for several years we couldn't stand Lisa Leslie in Houston.

So it didn't surprise me when I heard that one of the teams involved in a rare WNBA brawl was the Sparks. It also didn't surprise me it happened in Detroit. The Shock lived up to their nickname and derailed the Sparks bid to threepeat in 2003 (to the eternal gratitude of Comets fans). 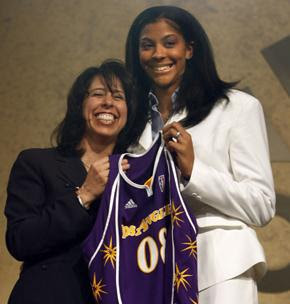 So I would probably surmise that the Sparks have a heightened dislike for the Shock and the feeling is probably mutual. The Shock are also legitimate WNBA title contenders as well. With the early season headlines being grabbed by the Sparks after drafting all everythang player Candace Parker and the media practically giving them the crown before a game had been played probably generated a lot of resentment in WNBA locker rooms outside of Los Angeles.

With this game being nationally televised, the Shock not only wanted to prove that they were a championship caliber club, but wanted to set a physical, intimidating tone for what would happen if the two teams meet later this fall in the WNBA Finals.

The Sparks won this game in Auburn Hills 85-81, but everybody's going to remember the last five seconds of it.
Posted by Monica Roberts at 1:12 PM