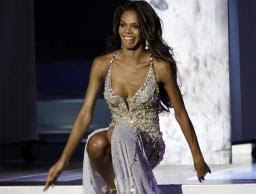 So what happened to my Houston homegirl? Unbelievably, for the second year in a row, the Miss USA rep trips during the evening gown competition.

Probably the thought going through Miss USA's Crystle Stewart's mind and all the contestants in this year's Miss Universe pageant in Nha Trang, Vietnam was 'don't fall'.

I'm referring to the image of Miss USA 2007 Rachel Smith falling during the evening gown portion of last year's event in Mexico City and still managing to score high enough to squeak into the five finalists to the disgust of the hometown Mexican crowd. She eventually finished fourth in last year's pageant and 'The Fall' is one of the more popular clips on YouTube.

Just before it happened, host Jerry Springer even alluded to last year's mishap in his banter with co-host Mel B.

Miss USA 2008 Crystle Stewart was probably on track to at least make the five finalists, but had to get past the evening gown competition. This year the Latinas were bringing it. Miss Venezeula, Miss Colombia, Miss Dominican Republic, and Miss Mexico were serving it and scoring high with the international panel of judges. I felt if Crystle could get to the finals and get a decent question that showcased her intelligence and public speaking skills, she'd have a good chance to win.

But that slip cost her big time. Although like Rachel did last year, she got up as if nothing had happened, she only scored an 8.0. I knew that wasn't going to cut it with the Latinas scoring in the low to high 9's and after what happened last year, there was no way she'd be allowed near the five finalists.

The one thing that's already irritating me is the hateraid and snide racist comments that are already coming her way that I've peeped on the Net.

So we'll have to wait another year to see if a Miss USA can finally break the dry spell that we've had at this pageant. The last Miss USA rep to win it was in 1997
Posted by Monica Roberts at 10:20 PM

girl....it just wreaks of conspiracy to me--like maybe they oiled her shoes or something. i just think it's TOO MUCH of a coincidence!

I was watching the pageant, and it seems like the choreography was off.

Springer called 'Miss USA' twice, and what I speculate is it created a temporary urgency for her to get on stage as quickly as possible...and the rest is history

I think she would have won had she made it to the five finalists, because the interview portion was her strength.

Oh yeah Crys,
Welocome to TransGriot from one Houstonian to another one. ;)

I participated in quite a lot pageants already and it`s really a tough job. Standing on the stage smiling for more than an hour and then start walking with full grace after your feet have become numb already isn`t easy.
I once took part in a competition where 30% of the contestants tripped and others had their gowns ripped.
Thats why I stick to a traditional Thai dress with wich its easier to walk.