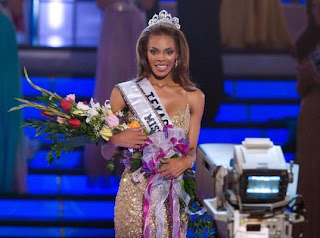 When my Houston homegirl became the sixth sistah to win Miss USA back in April, and she was a Cougar alum to boot, I already liked 26 year old Crystle Stewart.

She said while she admired both candidates, she was more drawn to the Democratic hopeful.

"I like Barack Obama -- just his poise and the way he motivates people -- and that's something that draws me," said the Texan beauty, who works as a motivational speaker and is writing a book called "Waiting to Win."

Asked if she would vote for Obama, she said: "That's a secret, but yes!"

She also threw McCain supporters a bone as well. "John McCain is an American hero," she said of the Republican Party hopeful. "I'm actually kind of torn because I think he's a great person, he's older and he might be a little bit wiser," she told AFP on the eve of the Miss Universe contest, to be broadcast Sunday evening US time.

"But Obama's on the higher end of the list," she added. 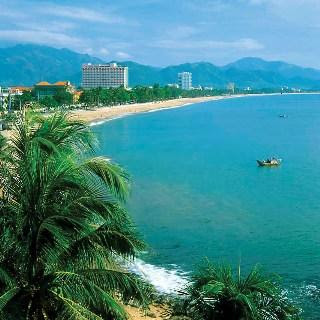 Because the event is being held in Nha Trang, which during the Vietnam War was a major US naval base, she was also asked a question by the AFP reporter about that period.

Stewart said she was proud to represent the United States in an event held in Vietnam, once America's battlefield enemy, because the show could act as a bridge between the countries and help post-war reconciliation.

"That was 30 years ago, and we had a terrible conflict, but now we're working together, and I think this will show everyone that USA and Vietnam can be very friendly and cordial to each other," she said.

"Hopefully we can be role models to other countries, to work in cooperation and peace together... It's bringing the countries closer together."

The finals are being televised at 9 PM EST tonight, and I hope that Crystle continues to make history.
Posted by Monica Roberts at 11:26 AM