(You Gotta) Fight For Our Right To Potty 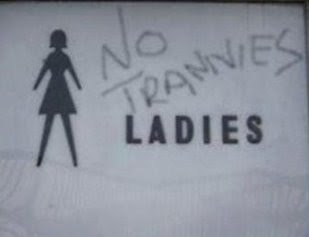 TransGriot Note: It's time for another song rewrite. The idea for this one actually came from Ethan St. Pierre and Bet Power. I came up with the rewritten lyrics because I like 'errbody' else in the trans community is beyond sick and tired of being sick and tired of the bathroom issue being used to delay and scuttle ENDA.

So y'all know what time it is. Fire up the iPod's and sing along with the revamped lyrics

Trans people need to pee but we don't wanna go
Needs to be gender neutral but Barney says, "No!"
We need ENDA passed so we can go to work
Right wing preachers hatin’ on the bill like ignorant jerks

We gotta fight for our right to potty

Bathrooms based on presentation need to happen yesterday
GOP hypocrites are saying “No way!”
Facing trans discrimination can be so sad
Coming from so called allies makes you fighting mad (Busted!)

We gotta fight for our right to potty

Don't like that I transitioned? Why should you care?
Don’t need to know what genitalia that I have down there
I’ve got to pee so bump that noise.
I’m not (will be) going to use a bathroom with cisgender boys!