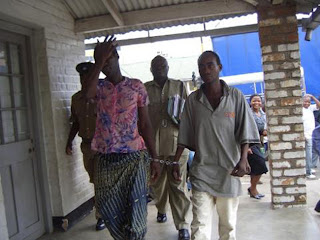 I'd been hearing much about the Malawian couple that has been sentenced to 14 years hard labor for their relationship.

I'd been asked why I haven't commented on it yet, and one of the reasons was that I wanted more information on the issue before I do so. There are times I'd rather get it right than posting it 'right now'. My intuition was also telling me there was more to this story than the first sensational headlines warranted.

Well, thanks to South Africa's Gender DynamiX and Pinay TG, I have another interesting piece to tell you about.

Tiwonge Chimbalanga, one of the people involved, identifies as trans.

Today activists the world over protested the conviction of two gay men in Malawi. Even though activists from many different political persuasions joined hands in a protest in Cape Town today, local transgender activists are highlighting the fact that Tiwonge Chimbalanga clearly expresses a female identity.

According to Ian Swartz from OSISA (Open Society Institute of Southern Africa) Tiwonge Chimbalanga sees herself as a woman. “Tiwonge so clearly identifies as a woman and she has expressed her identity as such more often than not. I think if she knew the word Transgender she would come home to a world of understanding of herself” he said recently after visiting the couple in prison.

A local activist who calls her “Aunty Tiwo” visited her too and to him she said: “I am just a woman who loves my man. I’d rather remain in prison than to be released into a world where I am kept away from Steven”

“Advocating for Transgender people’s rights in most African countries is problematic for us” says Robert Hamblin advocacy manager for SA Transgender organization Gender DynamiX. “Gender variant identities are not acknowledged and just about any sexual minority is called gay or homosexual. This is because a person is assigned a gender based on their genitals, despite how they self identify.”

Gender DynamiX stood together with other activists today in a protest called by Social Justice Coalition (SJC). SJC was joined by LGBTI organizations protesting the conviction of these two people. The group of activists urged the SA government to negotiate the release of the couple and to offer them asylum in South Africa. The group also demanded that the SA government end the continued silence about human rights abuses against sexual minorities on the rest of the continent.

Gender DynamiX condemns the conviction of Steven Mongeza and Tiwonge Chimbalanga. We call on the South African government, as the only state in Africa to recognize equality for sexual minorities, to uphold the South African constitution by offering asylum to the couple.

“Even though the identities of Tiwonge and Steven are misunderstood by the world we stand together with gay and lesbian activists in their work to try and get justice for our trans sister and her partner.” Says Tebogo Nkoana outreach officer at Gender DynamiX.