Stop Lying Negro GOPers- MLK is NOT A Republican

The sellout Negroes in the National Black Republican Association have been feverishly trying to pimp a lie that the Rev. Dr. Martin Luther King, Jr. was a Republican.

Where do they come up with such delusional feces? But I guess it comes naturally when you hang out in a party that bends and twists historical reality to fit their political philosophy.

Well, time for Moni to have fun debunking this conservalie. 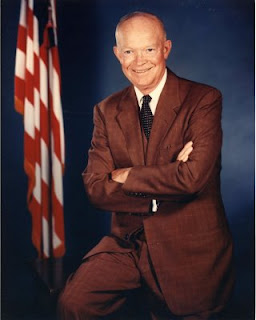 The facts are that the political script was flipped from our current 21st century political paradigm. From Emancipation through most of the 20th century, African-Americans voted for, were active in and supported Republicans because of their progressive civil rights attitudes. The Democrats, thanks to the Dixiecrats and pre-Civil War slavery defenders had racial attitudes similar to 21st century Tea Party members and the modern conservadominated GOP.

Now let's move on to Dr. King specifically. In 1960 Dr. King was arrested for trespassing during a sit-in and held in Georgia's notorious Reidsville prison.

Fearing for his son's life, Rev. Martin Luther King, Sr. (who was a Republican at the time) appealed to Democratic presidential candidate Sen. John F. Kennedy to secure his release. 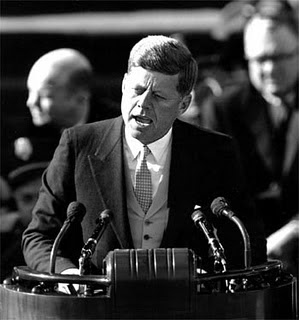 When Dr. King was freed, despite the fact that JFK was a lukewarm supporter of civil rights, Daddy King renounced his GOP ties and pledged to deliver 10 million votes to Kennedy. That began the now four decades long support and movement of African-American voters to liberals and the Democratic Party.

President Johnson's later signings of the 1964 and 1965 Civil Rights Acts, the 1965 Voting Rights Acts and other pro-civil rights bills and initiatives continued the momentum of that seismic political shift in addition to the Dixiecrats, racists and conservatives fleeing to the GOP in the wake of the LBJ electoral landslide in 1964. 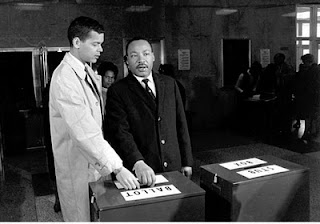 In the 1960 presidential campaign MLK voted for Kennedy, and for Democrat Lyndon B. Johnson four years later. He also publicly repudiated 1964 Republican presidential candidate Barry Goldwater and campaigned for LBJ, but saw himself as non-partisan. He criticized LBJ for the Vietnam war just as harshly as he'd done Goldwater in the 1964 campaign.

Hmmm. Voted for Democrats, criticized the GOP candidate and the democratic president. So what do do his colleagues have to say?

"To suggest that Martin could identify with a party that affirms preemptive, predatory war, and whose religious partners hint that God affirms war and favors the rich at the expense of the poor, is to revile Martin," said former SCLC president Rev. Joseph Lowery.

Rep. John Lewis (D-GA), who marched with King in the 1960s, called the ads an "insult to the legacy and the memory of Martin Luther King Jr." and "an affront to all that he stood for." 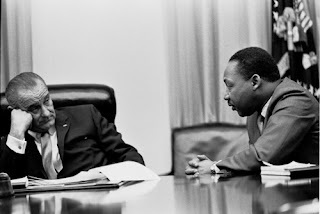 MLK biographer and historian Taylor Branch had this to say about the 2008 NBRA billboard that jumped this discussion off in 2008 and about Dr. King.

“He absolutely deplored the Republican Party of Goldwater and Reagan,”

King "never endorsed anybody." He went out of his way to avoid appearing partisan. "The closest King ever came to supporting a candidate openly was (Democratic President Lyndon Baines) Johnson in '64, right after he'd gotten the civil rights bill passed that outlawed segregation. But even then he didn't quite endorsed him," Branch said.

Although King barnstormed for Johnson, he would never allow himself to utter the entirety of a popular chant of the day: "All the way with LBJ." 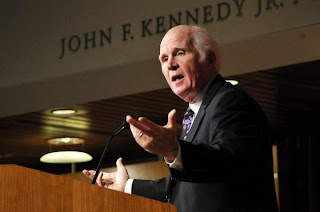 Branch also noted that Dr. King, Jr. was indeed friendly with Richard Nixon, who had been a member of the NAACP as vice president in the 1950s.

"He always said that he had a non-partisan, like a prophet's role, not a politician's role, and that he was for justice and it wasn't really black and white and it wasn't Democratic or Republican," said Branch. "He exasperated a lot of the people around him for that reason."

So stop lying Negro conservafools. MLK is NOT a Republican.
Posted by Monica Roberts at 4:00 PM

Good point, but you did ignore one other President who was important in securing the vote of African-Americans: Harry Truman.

Truman was never afraid of doing hard things, and when it came time to integrate the military he made the call and did it.