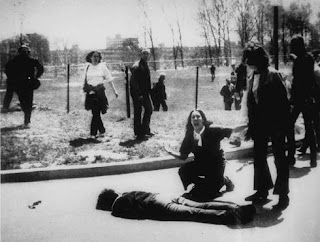 On my birthday in 1970 an anti-Vietnam war protest was held on the Kent State University campus in Kent, Ohio, northeast of Akron. It was being held to protest President Nixon's decision to widen the Vietnam war by invading Cambodia, which had happened only a few days before.

That protest would turn tragically ugly when for some still unexplained reason the Ohio National Guard fired on the crowd after tear gassing them to break up the protest.

Four students died as a result. Ten days later there was a similar incident at HBCU Jackson State University in Jackson, MS in which two students died.