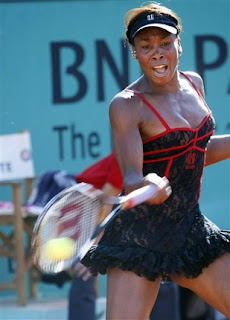 We have one less Williams sister playing tennis in the Roland Garros women's singles draw.

She's still playing tennis in Paris, but it will only be doubles with Serena until hopefully June 3.

Venus did get a little redemption by teaming with Little Sis to beat the Czech Republic's duo of Andrea Hlavackova and Lucie Hradecka in straight sets 6-1, 6-2.

Team Williams moves on to the quarterfinals in their bid to win their first French Open doubles title since 1999. They will take on the duo of Maria Kirilenko of Russia and Agnieszka Radwanska of Poland. 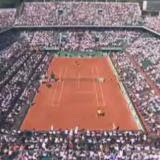 She plays her fourth round match against Israel's Shahar Peer. If she gets past Peer, she gets the winner of the Justine Henin-Samantha Stosur match.
Posted by Monica Roberts at 2:00 PM