Carville's Ten Rules For Progressives To Live By 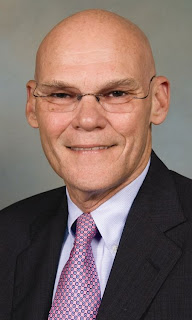 TransGriot Note: Even though it's a little old, the Ragin' Cajun makes some valid points that need to be heeded and committed to memory by all liberal progressive peeps fighting the Forces of Intolerance.


1. Stop Apologizing for Everything

You are a member of the party that beat the Depression, won two world wars, cut elderly poverty by two-thirds, and is responsible for the greatest period of economic growth since World War II. Democrats wake up and start looking for someone to apologize to. Stop It. You've got nothing to apologize for.

2. Quit Conceding That The Other Side Has A Point.

I taught school for a little while, and guess what? There is such a thing as a stupid question. The same goes for opinions. Not everyone has a valid point. The next time a right-wing nut tells you that the Bush plan gives the poor a lot of incentive to get rich don't say, 'Well, you've got a point." They don't have a point. What they are saying is stupid. Sometimes a mind is like a mouth; you just have to shut it.

Think only of, and talk only about big things. When I advise candidates, I tell them it is okay to have an opinion on everything, it is just not okay to render said opinion on everything. I may favor a transgender amendment. But if I were running for president, I would not make that part of my core platform of ideas.

I grew up in the town of Carville, Louisiana-so named because my family provided the town with its most indispensable federal employee, its postmaster. When I was growing up, my daddy convinced me that I was living in the best place in the world. He always made sure I remembered that we had the best climate, the best people, the best family, the best soil, the best peaches-the best of everything. "Of any place that you could live in the world, " he'd tell me, "you're living right here in Carville, Louisiana." Man, I thought it was the garden spot of the universe. Did I know that there was a Broadway or a Michigan Avenue or a Rodeo Drive? No. And I didn't give a damn.

Progressives are genetically inclined to talk about how bad things are. We'd rather be the skunk than enjoy the garden party. We need to be able to see the good-and make a case for making it better. In short, we need more of my daddy's Carville attitude in Washington and less of our liberal activist carping one.

5. Use Their Weapons Against Them

Republicans love to talk about the right and wrong. They do so with an absolutely religious fervor-and that makes sense because more than a small number of them use their religion as a justification for their policies.

If they're going to do that, it's fair for us to ask questions like "Is cutting funds for the schools that educate the kids of the people fighting for us in Iraq a bad, stupid right-wing policy, or is it an affront to God?" "Is rolling back clean water protections so your rich contributors can blight the environment bad policy, or is it a sin for which you can burn in hell?"

6. Attack Their Lack Of True Patriotism

Every American child has heard the story from his or her parents or grandparents about how they worked hard to make things better for the next generation. They struggled to be the first in their family to finish high school, so that the next generation could be the first in their family to finish college, so that the next could be the first to finish graduate school. And whether your family came here on the Mayflower in 1620 or from Manila in 2003, we all share the belief that America is not just a good place today, but is going to be a better place tomorrow.

Republicans have destroyed that. Being an American, honoring the flag, is much more than some trumped-up staged landing on an aircraft carrier. Just having a lot of red, white, and blue bunting at your convention isn't patriotic. Their lack of understanding of what this country is really about demonstrates a total lack of patriotism. We need to call them on it.

I can tell you with absolute certainty that back in 680 B.C., the first sentence for the first speech in the first campaign of the first Athenian running for City-State Council was this: This election presents a choice. Every election is a choice, and as progressives, our goal must be to ensure that the choice isn't between bad and nothing; the choice needs to be between good and bad. We progressives need to define our visions of American, not just react to the right wings vision of America. We don't like the America they want to build, we need to show Americans something better.

8. Don't Let the Little Crap Get in the Way of the Big Shit.

You have to pardon my language, but I just don't know a better way of saying it. As progressives we need to do more than fight symbolic battles, we need to be driving toward a larger goal.

For example, the big shit is energy independence. The little crap is drilling in the Arctic National Wildlife Refuge. I once asked a friend of mine who was very active in the environmental movement, "Would you trade off a fuel standard that freed us from Middle Eastern oil for drilling in ANWAR?" He said no. To me that's an example of the little crap getting in the way of the big shit. Would you trade off late-term abortions for universal health care? To me, the great gain of universal health care is far more importance than the largely symbolic battle over a little-used procedure. Don't get me wrong; symbolic fights are periodically worth fighting. I have nothing against them, and I'm not saying we should abandon our principles. What I'm saying is that we should be willing to make a trade-off to advance them.

9. Sometimes You've Got to Be Willing to Fight. Period.

I believe that in the 180 days prior to any election, candidates should be required to stay away from cocktail parties, dinner parties, or any social event that occurs in the following areas: Georgetown, Foxhall, Spring Valley, Bethesda, Old Town Alexandria, McLean, and Chevy Chase and other bastions of stupidity inside the Washington Beltway.

One of the reasons Tom Delay was so successful is that he doesn't give a damn what any people in any of these neighborhoods think. Democrats tend to become completely paralyzed by it. I can't tell you the number of times in a Democratic meeting where someone says that such and such was said at so and so's dinner party, and that the deputy assistant to the associate editorial page editor at the Washington Post rolled her eyes. Everybody freaks out. For reasons not completely understandable to me, the effect is far greater on Democrats than Republicans. This is a disease we must cure ourselves of.
Posted by Monica Roberts at 1:00 PM