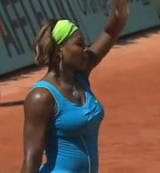 World Number 1 ranked Serena Williams not surprisingly is the lone American woman standing in the singles competition at the 2010 French Open.

She began her second week in Paris as the French Open's Number one seed by stepping onto Court Philippe Chatrier and taking out Israel's Shahar Peer in straight sets 6-2, 6-2 to move on to the quarterfinals.

Meanwhile, the Williams express hasn't dropped a set as they roll through the 2010 Roland Garros doubles competition. They moved on to the doubles semifinal with a 6-2, 6-3 straight set demolition over the duo of Maria Kirilenko of Russia and Agnieszka Radwanska of Poland.

Here's hoping that the Williams sisters make it to their first French Open doubles final since 1999.
Posted by Monica Roberts at 1:30 PM