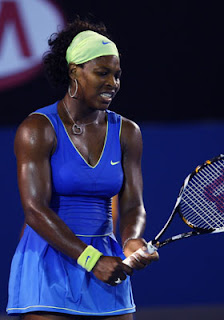 New year, new tennis season, and the first Grand Slam tournament is being played Down Under.

Y'all know I have much love for my my favorite tennis playing siblings and was hoping to see another all-Williams final. I was horrified to watch Venus just stop doing what worked in the first set and get unceremoniously bounced from the Australian Open women's singles in the second round by Carla Suarez Navarro 6-2, 3-6, 5-7.

But no worries mates and sheilas. Baby Sis upheld Williams family honor and made it all the way to Saturday night's (Melbourne time) final at Rod Laver Arena while battling the oppressive summer heat. (Yes peeps, it's summer south of the Equator)

Serena will be playing in her fourth Australian Open final versus Russia's Dinara Safina after taking only 99 minutes to beat Russia's Elena Dementieva 6-3, 6-4.

Serena interestingly enough has won the Australian Open in 2003, 2005 and 2007 and since this is an odd numbered year, let's hope the pattern continues.
Posted by Monica Roberts at 8:23 PM

I would know absolutely nothing about sports if I didn't read this blog.

Speaking oof trying, wanted to send you an e-mail about you guest post I'd like you to write but the link on your blog is broken. Send me an e-mail on mine please.