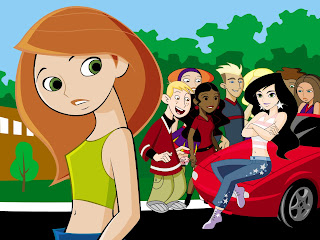 One of my guilty television pleasures is watching Kim, Ron, Wade, and Monique negotiate the travails of high school life while jetting around the world to fight evildoers such as Dr. Drakken, Shego, Monkey Fist, Duff Killian, Senor Senior, Sr. and Senor Senior, Jr.

Oh yeah, and it does has a catchy theme song, too.

While I have a major beef with how it was heavily promoted by Disney vis a vis The Proud Family, I still like the cartoon.

Like 'errbody' else who watched it I was happy to see lifelong friends Kim and Ron kissing each other at the prom and becoming a couple. It's been interesting to see not only how their relationship develops, but how Kim deals with her twin brothers Jim and Tim, AKA 'the tweebs' being skipped to the 9th grade and now attending Middleton High during her and Ron's senior year. 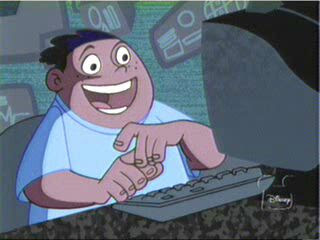 It's also nice to see supergenius Wade get out of his room (voiced by Tahj Mowry). Wade is the youngest member of Team Possible and graduated from high school and college at age 10. He also creates much of the high-tech wizardry Kim and Ron use on their missions and keeps her up to date with a constant stream of intel filtered through the computer in his room.

Monique (voiced by Raven) is Kim's best female friend. She works at Club Banana, has become its assistant manager and even convinced Kim to work there.

Monique not only keeps the jet setting Kim cognizant of the Middleton High School happenings, she gives Kim sage advice when she's sorting out various problems in her non crime fighting life. She like Wade even helps Kim and Ron on an occasional crime fighting mission sometimes as well.

Kim Possible has garnered an international following and thanks to YouTube, yours truly gets the chance to catch up on whatever episodes she's missed.
Posted by Monica Roberts at 5:57 AM