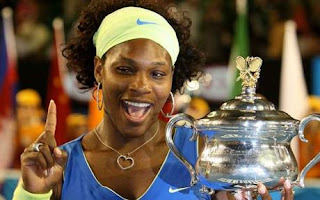 One Grand Slam tournament down, three to go.

You can add another truism to the other certainties in life. If it's an odd numbered year, Serena Williams will win the Australian Open.

If there was any doubt about whether the Williams sisters were back to their usual domination of women's tennis, well Baby Sis put an end to any protestations to the contrary.

Serena Williams crushed Dinara Safina 6-0, 6-3 in 59 minutes to take her fourth Australian Open title and her tenth Grand Slam singles title. With the win Serena replaced Jelena Jankovic as the Number One player in women's tennis.

The domination of Safina was so complete that Baby Sis took only 22 minutes to win the first set with an aggressive attacking style that flustered Safina into multiple unforced errors. 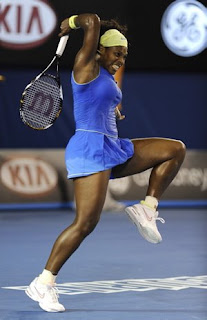 Safina composed herself and tried to rally in the second set, breaking Serena to take a brief 1-0 lead. Baby Sis responded by breaking Safina's serve twice to forge a 4-1 lead.

Safina kept fighting and managed to hold serve, cutting Serena's lead to 4-2 but Serena quickly built it back to 5-2. Safina held serve thanks to a critical referee's call that gave her a 40-30 lead and allowed her a stay of tennis execution at 5-3. Serena would not be denied as she served her way to a 40-0 lead and three championship points which she quickly converted for the win.

Dinara Safina was trying make a little tennis history of her own. Had she won she and her brother, 2005 Australian Open champion Marat Safin would have become the first brother-sister siblings to win the same Grand Slam tournament. But at the level Serena was playing that wasn't happening.

The Williams sisters have won the last three Grand Slam tournaments, and if today's match was any indicator, it may be a long year for the rest of the women's tennis world.

May I remind you peeps that Baby Sis is only 27 and in 2011, don't bet against Serena Williams winning a fifth Australian Open singles title and adding another Daphne Akhurst Memorial Cup to her trophy room.
Posted by Monica Roberts at 7:44 AM