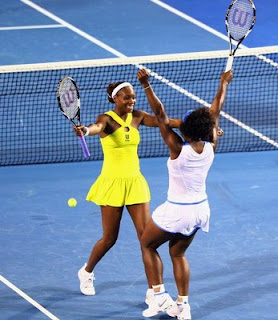 Well, it wasn't a totally bad week for Big Sis in Melbourne. Venus shook off her shocking second round loss to team up with Little Sis and grab the 2009 Australian Open doubles title in straight sets over Slovakia's Daniela Hantuchova and Japan's Ai Sugiyama 6-3 6-3.

The heat continues to be the other story of this tournament, and the retractable roof at Rod Laver Arena was once again closed by tournament officials with the outside temps approaching 115 degrees (40 degrees Celsius) for the third straight day.

Didn't matter because the Williams sisters were just as hot as the weather. They blitzed through the first set in 38 minutes. Despite some service problems they relentlessly attacked their opponents and repeatedly broke their serves to secure the victory. 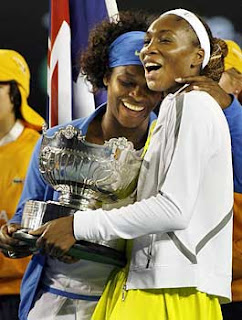 In addition, they have climbed into a third place tie with Virginia Ruano Pascual and Paola Suarezon on the all time list of Grand Slam doubles title winners. They trail only Martina Navratilova and Pam Shriver who won 21 titles and the duo of Gigi Fernandez and Natasha Zvereva with 14.

Big Sis told reporters that she feels she and Little Sis would have won more titles if they had played more doubles.

I agree. I think they'd be in striking distance of Martina and Pam Shriver if they had over the last decade, but it's still not too late for them. The next major is the French Open in Paris and then Williamsdon, oops Wimbledon.

Serena still has her singles championship match left to play Down Under, and I hope this was a nice warmup for her.
Posted by Monica Roberts at 5:04 AM