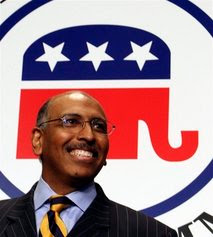 It took six rounds of voting, but he eventually bested the incumbent chair Mike Duncan from Kentucky and three challengers that included Ken Blackwell.

Well, he's got a tough job ahead of him. He takes over a party with a major image problem, whose political base has shrunk to the Deep South and has been spanked in consecutive national elections.

"We're going to say to friend and foe alike: We want you to be a part of us, we want you to with be with us, and for those who wish to obstruct, get ready to get knocked over," Steele said.

As a proud yellow dog Democrat I've never been a fan of Steele, but I'm not going to be as nekulturny as Rush Limbaugh was toward President Obama (and still is). I salute your history making accomplishment but sincerely doubt I'll be rushing to join your party since your policies aren't even in the same reality based universe I inhabit.

It will be interesting to see what you accomplish during your term as GOP chair, and even if you can breathe any life back into the moribund Republican party.

The Republican Party is still looked at as a 'rich white boys party'. If they say their message is one of hope, how come it's never presented to communities of color?

Hope for their primary clients, the same 'rich white boys'.