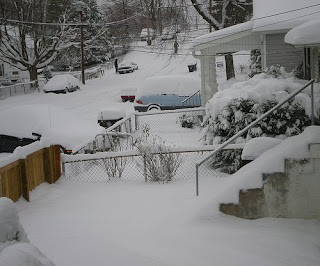 When I was growing up in Houston, falling snow was a cause for civic celebration. Living here in Louisville, I've leaned to despise snow if it falls in amounts of more than three inches.

As many of you know who watch the Weather Channel, we got whacked by a nasty winter storm last night and Round Two is hitting us later this evening. The kids are enjoying another day off from school, most businesses are closed and there aren't many cars on the roads either. I've got to trudge off to work later and hopefully I'll be back in the house before the next wave hits.

The worst snow we've gotten since I moved here was the 10 inches we got whacked with last March that I fortunately missed because I was rolling up I-65 with Dawn to Chicago for a fencing tournament. We also received 9 inches of snow from that 2004 Christmas eve storm that dropped snow along the Gulf Coast from the Texas-Mexico border to New Orleans and points north.

It's times like these I really miss home and walking around in 70-90 degree weather in January with shorts on. But cold weather has its purposes in the great scheme of things, and as long as it means I won't be swatting at hordes of mosquitoes this spring and summer, then I'll deal with it.
Posted by Monica Roberts at 11:14 AM

Make sure to dawn your warmest winter booties and coat, then it might become easier to imagine that 70-80 degree weather you're fond of. ;]

ugh...due to global warming and the ecological decline of the planet it will be reaching a balmy 30 degrees tonight. even though it was a high of 70 this afternoon. makes no sense.

when i was in high school (and that really wasn't that long ago) we had three or four weeks of real winter weather. then it was over and sunny.

Ah, the blue northers, I remember them well.

I just want to say that sadly I totally feel this. Back in Nashville whenever we got ice it was a joyous occasion; we almost NEVER got snow (but we got cold ass temps). Now that I'm in Johnson City TN (which is up in the Appalachia mountains if you were wondering) for college, snow is my damned enemy. Seriously. Walking in that shit for class is not how I envisioned my life at all!

You can move to a warm weather city after you graduate. ;)

VeganBattleBot,
Over the last two days it's gotten above freezing, Saturday we're supposed to get to 41 degrees and the sun is out.