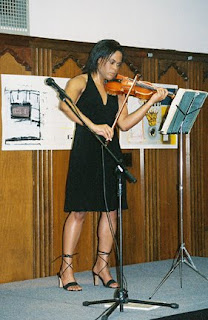 I haven't had an opportunity to meet her in person yet, but Tona is someone I've known for a few years, chat with on a regular basis and marvel at her musical gifts.

The Norfolk, VA resident has been involved in the music world since she started learning how to play the violin at age 10. She attended the prestigious Governor's School For The Arts in Norfolk and has won numerous musical competitions and garnered awards since age 14.

She's continued her lifelong involvement with music since her transition several years ago, and was selected in April 2006 to take part in the Tranny Roadshow, a touring group of transgender performance artists and is studying with mezzo soprano Robynne Redmond among her other ongoing projects.

Tona feels that it's important to show that an African descended transwoman can achieve and succeed in any endeavor that we put our minds to, and she's been a wonderful role model in that regard.

She's making her mark in the classical music world, and best of all she's doing it as an out transwoman.

You can check out her website at http://www.tonabrown.net/home
Posted by Monica Roberts at 7:50 AM

I toured with Tona on the Roadshow back in 2006. She regularly moved me to tears and awe when she performed. I still consider it a privilege to have been able to share a stage with her.

I'm looking forward to seeing her perform one day.

I feel lucky to have had the chance to see Tona perform live when the Tranny Roadshow came to Philadelphia. She is very talented.

Thanks so much for making me aware of this great talent. I grew up studying classical ballet and have also studied classical singing rather seriously for 5 years. Neither was my calling, but it's so moving to see a trans woman of color working at such a high level in classical music.

I'm now a fan of Tona as well well as you Monica. Thanks again.

Stay in the love,