I'll Trade You Alberta For Minnesota 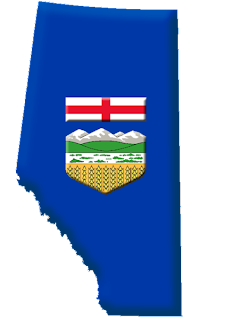 One of the frequent themes that pops up in any conversation between me and my Canadian friends besides waxing poetic about all things 'Timmys' is them dissing Alberta.

As some of you may or may not know, Alberta is frequently compared to my home state of Texas because of the wealth, the oil industry ties, the rampant conservatism on steroids both there and my birth state, and conservative national leaders from Alberta and Texas despised by the rest of the nation's citizens.

One of the jokes I frequently hear from Canadians living in the eastern end of the country is 'we'll trade you Alberta for Minnesota' (or whatever deal they can get for it).

Sorry, we ain't giving up Minnesota. What would I do without Prince, the Minnesota Vikings, the Minnesota Twins, and when I'm griping about what passes for cold weather here in Da Ville, thanking my lucky stars I'm not there or in Palin-run Alaska?

The Oil Sands, Edmonton, Banff National Park and Calgary make it a tempting offer, but until we can turn Texas back to its progressive roots, we can't risk having Stephen Harper and his conservafriends in Wild Rose Country linking up with the Republican idiots they admire.

We just got a Democratic president in the White House who is quite busy cleaning up the Chernobylesque mess that Bushie boy left behind.

So, in the words of the latest game show craze south of the border, No Deal!
Posted by Monica Roberts at 4:54 AM

Not even for a week?? See how it fits for a little bit? We'll throw in a few more Timmy's to sweeten the deal, eh?? ;)

Seriously, as much as the stereotype of Alberta conservatism is and as much as a dork Harper is, I wouldn't want it to. And there are some wonderful, very open people in Alberta. Heck, my cousin, who lives in Calgary, was able to take to 4 vegan restaurants and was going to a "poly conference" being held there.

The trans community is probably small but I suspect that it's there. ;)

That all said, Canada wouldn't be the same without Alberta.

Syrlinus,
We have the same stereotype about my birth state, so that's something else Alberta and Texas share.

Texas does have progressive oases in the cities of Dallas, Austin, and Houston in which transpeople live.

Tell you what, I'll trade you Alberta, Harper, Don Cherry, and a years supply of Timmys for Michelle Obama. I think that is a pretty good trade.

Renee,
You're gonna have to add Gov Gen. Michaelle Jean to that deal ;)

Monica, if we add Michaëlle Jean to the deal, we should at least be able to keep the donuts. The GG is hot!