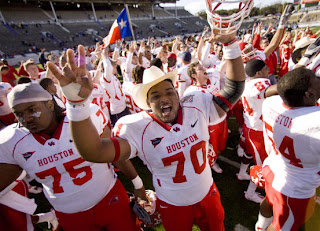 I have to give my alma mater a shout out for winning a bowl game for the first time in 28 years by beating Air Force 34-28 in Fort Worth's Bell Helicopter Armed Forces Bowl.

The last time my school won a bowl game (the 1980 Garden State Bowl in which we beat Navy 35-0) I was a UH freshman, Bill Yeoman was the head coach, we were a member of the Southwest Conference and we were playing our home games in the Astrodome.

But this current crop of Cougars and head coach Kevin Sumlin were sick and tired about hearing and seeing the 'Cougars are 0-8 in bowl games' comment. With a national TV audience watching, they were determined to do something about it.

I was proud of my boys. They played hard, it was an entertaining game that the Cardiac Coogs as usual made interesting, but eventually prevailed. 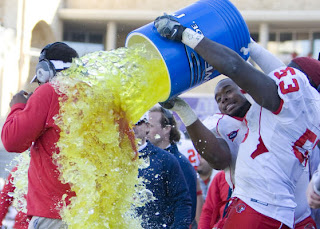 Great season Coach K. The team finished 8-5, were in the running for the C-USA title until the final weekend, won a bowl game and have some outstanding players returning such as QB Case Keenum and running back Bryce Beall.

But just one request from this Coog alum. Beat the hell out of Rice next year!
Posted by Monica Roberts at 10:34 PM