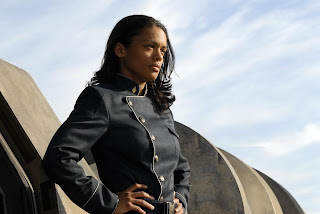 They ended with a startling cliffhanger of the fleet arriving at Earth after three years of interstellar travel and discovering it's a nuked out cinder.

In this episode we find out that Earth was not only nuked 2000 years ago, but it was inhabited by Cylons. We also discover that Kara Thrace died on the planet and before you holler 'she's the fifth Cylon', she isn't.

But the thing that shocked me more than all those discoveries was the suicide of my fave character on the show. Seems as though Dee was very troubled by the discovery of the nuked out Earth and finding jacks buried in the scarred landscape.

We see her babysitting Hera, going out on a date with Lee after encouraging him to take the reins of colonial political leadership and then retreating to her quarters after kissing him goodnight, putting a pistol to her head and pulling the trigger. 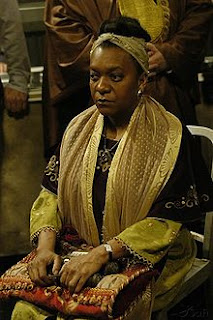 Even though Battlestar Galactica's my favorite show, one of the things I griped about when it first was reimagined was the lack of main African-descended characters on the show. Elosha, the priestess and spiritual adviser to President Roslin was killed off in the second season, and with Dee's suicide, the only African-American character left on the show is the Cylon Simon.

But one of the things I've always hated about sci-fi is that it seems as though if there's an African-American character on the show or an episode of it, they'll be killed off.

One of the few exceptions to that rule has been Lt. Uhura on Star Trek, Capt. Benjamin Sisko on Star Trek DS9, Lt. Tuvok from Star Trek Voyager and Lando Calrissian from Star Wars.

But unfortunately Lt. Anastasia Dualla won't be one of those characters.
Posted by Monica Roberts at 1:23 PM

That was so hard to watch

It was a 'what the frak' moment for me as well.